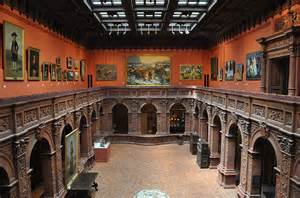 Please Note: The Hispanic Society’s Museum is closed for extensive renovations. The Library is open on a limited basis, by appointment only.

The collections of the Hispanic Society are broad and deep, addressing the culture of Spain, as well as a large part of Portugal and Latin America.

With more than 800 paintings and 6,000 watercolors and drawings, the Hispanic Society offers a comprehensive survey of Spanish painting and drawing,from the Middle Ages to the present, with particular strengths in the Spanish Golden Age (1550-1700), and the 19h- and early 20th-century. (including El Greco, Goya, Sorolla)