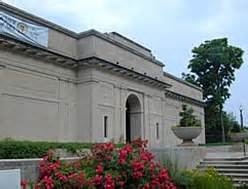 The Heckscher Museum of Art’s collection spans 500 years of Western art with particular emphasis on the 19th- and 20th-centuries. The collection now numbers more than 2500 pieces by American and European artists.

Particular strengths include American landscape painting and work by Long Island artists; and American and European modernism including many artists of the stature of George Grosz and Arthur Dove. Photography is a growing part of the collection, including Man Ray’s Electricité portfolio of 1931.

Highlights include work by Lucas Cranach the Elder, 17th-century Dutch and Italian paintings and English portraiture, including works by Melchior D'Hondecoeter, Girardon, and Raeburn. 19th-century European holdings include works by Boudin,  Courbet, and Gerome. An notable collection of 19th century American landscape paintings include Church, Inness, Bierstadt, Blakelock, and the Morans. The museum also owns a rare Winslow Homer tile painting and Eakins’s sketch for The Cello Player.