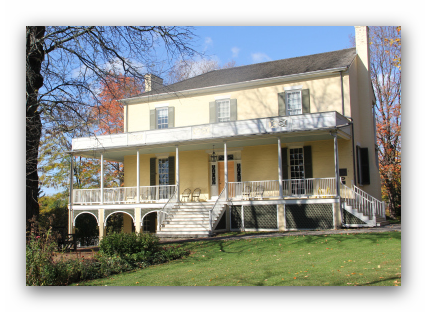 The Thomas Cole National Historic Site preserves and interprets the home and studios of Thomas Cole, the founder of the Hudson River School of painting, the nation's first art movement.  The site includes the 1815 Main House, the1839 Old Studio, a replica of the 1846 New Studio, and the Federal-style privy. The picturesque residential grounds provide panoramic views to the Catskill Mountains.

Cole had a profound influence on America's cultural landscape.  "In the early nineteenth century, many in this country were searching for a style of art that they could call their own - something uniquely American. Painter, poet, and essayist Thomas Cole (1801-1848) responded to this quest by creating pristine landscape paintings unlike any yet seen. ... He became the leader of an informal alliance of landscape artists now known as the Hudson River School."

Open for tours from May through October.

There are many memorable art sites within 15 miles of the Thomas Cole National Historic Site. Learn more and see a map by downloading the Hudson River Art Trail brochure.

Whether you go or not, Thomas Cole: The Artist as Architect, focuses on Cole’s architectural interests through architectural elements found in his paintings and drawings as well as in his realized and visionary projects, expanding our understanding of the breadth of his talents and interests. At the height of his career as the leader of the Hudson River School of American landscape painting, Thomas Cole listed himself in the New York City Directory as an architect. Why would this renowned painter, who had never before designed a building, advertise himself as such? The importance of Cole’s paintings and the significance of his essays, poems, and philosophy are well established, yet an analysis of his architectural endeavors and their impact on his painting has not been undertaken—until now. In celebration of the recreation of the artist’s self-designed Italianate studio at Cedar Grove. An essay by noted art historian Annette Blaugrund and a contribution by Franklin Kelly, illustrated with Cole’s famous works, sketches, and architectural renderings, reveal an unexplored, yet fascinating, aspect of the career of this beloved artist—and thus, a crucial moment in the development of the Hudson River School and American art.

Published to coincide with the exhibition “Thomas Cole: The Artist as Architect” at the Thomas Cole National Historic Site and travelling to the Columbus Art Museum, the book adds a new dimension to scholarship on the artist.