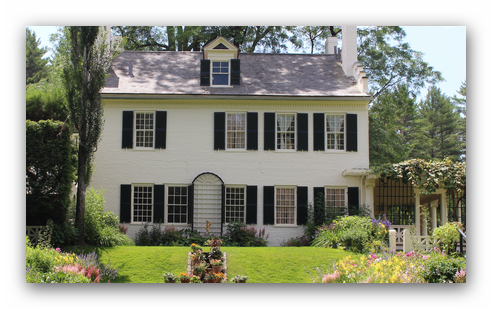 More than 100 of Saint-Gaudens artworks are displayed in his home, studios and gardens ... from heroic public monuments to expressive portrait reliefs, as well as the coins that changed the look of the American coin.

Seasonal activities include summer concerts, nature trails, and sculpture classes, from Memorial Day weekend through October 31. From November through late May, the exhibit buildings are closed, but the grounds remain open during daylight hours.

Augustus Saint-Gaudens (1848-1907) was among America's greatest sculptors.  He has been called the "American Michelangelo,"  and his sculpture has often been compared to the magnificent works of the Renaissance. As an advocate of new ideas and a new approach to sculpture, Saint-Gaudens played a preeminent role in developing America's cultural life and revitalizing the art of sculpture in the modern age. Sculpture came into its own in the United States after the Civil War (1861-65), when numerous monuments were commissioned to commemorate the national crisis and subsequent unification. In addition, the amassing of private fortunes during the country's unprecedented economic and financial growth led to an interest in sculpture for personal collections.

Saint-Gaudens contributed works of both types. His Shaw Memorial (1897), commemorating the Massachusetts Fifty-fourth Regiment, the first U.S. Army unit of African Americans, and his Lincoln Monument (1887) are among the most moving of the nation's Civil War monuments, while his Adams Memorial (1891) is one of the most evocative of his privately commissioned works. His works also included interior decoration for some of the great houses of the Gilded Age, portrait reliefs, and medals and U.S. coinage.

The son of immigrants, Saint-Gaudens studied at the Ecole des Beaux-Arts in France and spent eight years in Europe, where he found a freer and bolder form of artistic expression. On his return to the United States in 1875, he used his European training to create a new American style incorporating simplicity of subject, realism of form, and strength of emotion. His legacy, as both artist and educator, is nothing less than the shaping of American culture.