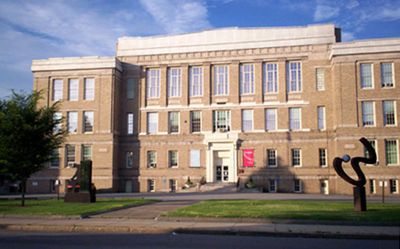 The Museum is open in the newly-renovated Jonathan Maynard Building on Framingham’s Centre Common.

The Danforth's permanent collection specializes in 19th and 20th century American art, featuring well-known artists such as: Gilbert Stuart, Whistler, Albert Bierstadt, Wallace Nutting, Yves Tanguy, Thomas Hart Benton and Faith Ringgold. The collection consists of more than 3,500 works in a range of media and artistic forms of expression from the traditional to installation and new media., including contemporary art by both emerging and established artists.

Danforth Art holds more than 300 works of the School of Boston Expressionism, artists living and working in the Boston area from the 1930s through the 1950s, who explored human emotion and spirituality with color and imagination. "These artists pushed paint across their canvases in a manner that would influence artists like Jackson Pollock and Willem de Kooning, and would impact the development of Abstract Expressionism."