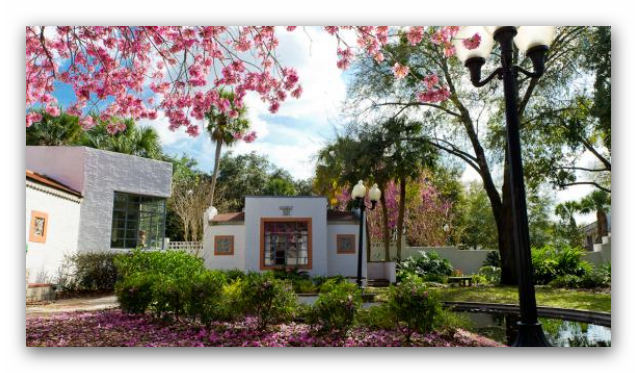 The Maitland Art Center is one of the five Art & History Museums – Maitland.

Founded in 1937 by artist and architect Jules André Smith, the Maitland Art Center is built in the rare Mayan Revival style, ornate with copious sculptural reliefs drawing on Mesoamerican, Asian and African iconographies. Originally known as the Research Studio, it was part of a colony that provided a place for artists to live, experiment with new forms and escape the demands of daily life.

The Maitland Art Center is the repository of a number of significant collections. Artworks created by André Smith (1880-1959 include hundreds of paintings, drawings, prints and sculpture. Also, the artists who lived and worked at the Research Studio during Smith’s tenure are represented in the collection, including works by Milton Avery, Doris Lee, Ralston Crawford. Additionally, the collection includes works by Whistler, Cassatt, as well as a strong representation of Central Florida artists working during the 1980s, 1990s, and 2000s.

These architectural decorations and the buildings that make up the historic art colony, were imagined and executed from motifs drawn from the cultures of ancient Mesoamerica, including the Maya and the Aztecs. Mixed with colonial, Christian, and in some cases even Asian iconography, this totally unique complex with its conjoined courtyards, gardens, and art studios may be the versatile Smith’s greatest creation.