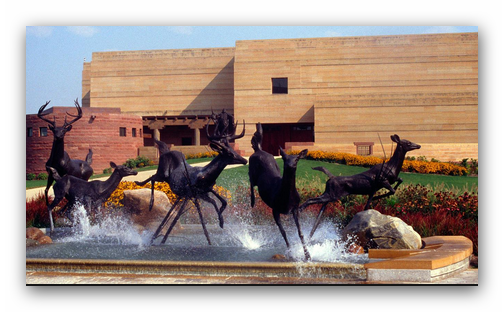 For centuries, humor has played a vital role among many Native American tribes as an important form of artistic expression. Native artists past and present employ humor in a wide variety of ways, using a range of artistic media.

Laughter is universally appealing and relatable. Laughter or rather, the opportunity to do so, is attractive or desirable.

Laughter and Resilience: Native Humor in Art will inspire an appreciation and better understanding of Native Art through the introduction of the concept of how humor, telling jokes, being light-hearted, and taking a less serious approach to life (especially during times that require or have required acts of resiliency), is central to many Native American groups.

A majority of the artists in this exhibit are from Arizona, New Mexico, and Oklahoma, as well as California; with a few additions of artworks from the Eiteljorg’s permanent collection. Representations from the Ojibwe, Lakota, and Haudenosaunee will be included, thus rounding out a more North American Native perspective on humor.

This fascinating and surprising exhibition — that examines Indigenous humor in all its forms — is curated by the Wheelwright Museum of the American Indian in Santa Fe, N.M.