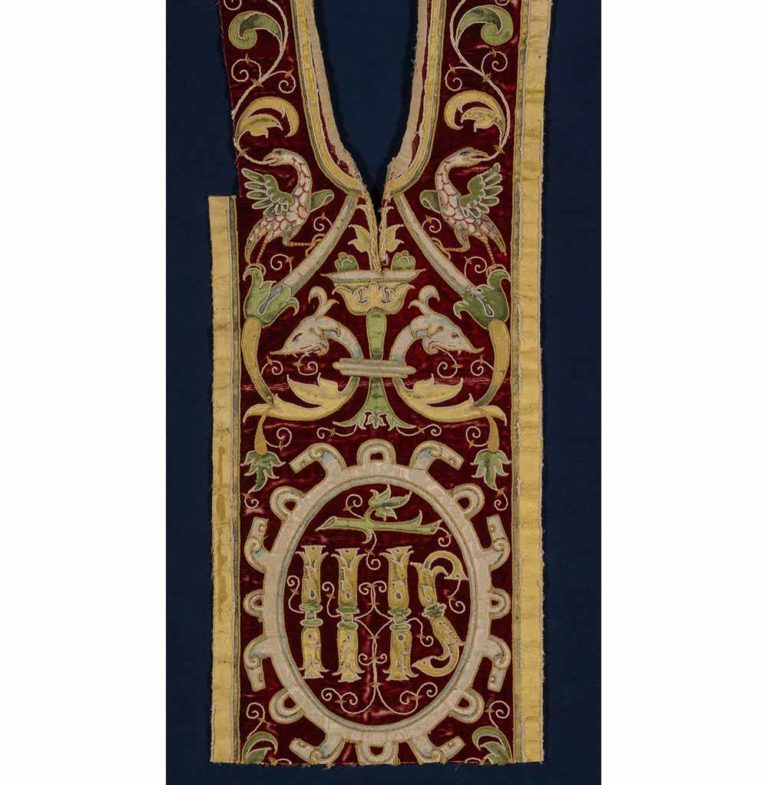 A single thread can make a stitch.  Multiple threads can be woven together to create cloth, but imagine threads fashioned into elaborate embroidery, gilded three-dimensional images, brilliantly-hued reversible fabrics, and even textiles purposely cut in a pattern that revealed glimpses of one’s undergarments below—a style fashionable during the 17th century.

This exhibition showcases silk and linen fragments spanning the 15th-17th centuries, a period of expanded exploration and trade, when Italy and Spain emerged as major centers of textile production. During this era, textiles with three-dimensional effects became popular within the Christian church and the secular world.

To create relief images, professionally trained embroiderers attached applied work, or appliqués, onto garments, such as this orphrey, a decorative panel for church vestments. The orphrey’s motifs were formed by first stitching small pieces of fabric, such as the birds’ white bodies, onto a base cloth. Padding may have been stuffed in between the layers of fabric to achieve added dimension, and then the various shapes were outlined and detailed with embroidery and cording. The appliqués, including dragon heads and birds flanking a chalice, are arranged in a symmetrical design. The panel is dominated by a medallion bordered with a scroll motif encompassing the Latin monogram of Jesus Christ, IHS.