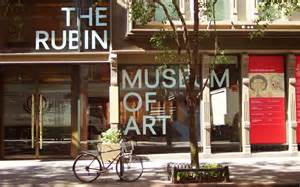 Chitra Ganesh: The Scorpion Gesture and Face of the Future

The mudra known as the scorpion gesture is said to have unlimited power and potential for transformation. Your presence will transform the Rubin galleries in Chitra Ganesh’s new series The Scorpion Gesture, causing her large-scale animations to appear as if by magic when you walk by select artworks.

Through November 4 in the Theatre Level: For Face of the Future, Ganesh reimagines how visual languages of science fiction and fantasy take shape and proliferate around the world in print culture, literature, and cinema. In addition to showcasing her own new works on paper and collage-based pieces, Ganesh has invited seven emerging artists—Maia Cruz Palileo, Nontsikelelo Mutiti, Tammy Nguyen, Jagdeep Raina, Sahana Ramakrishnan, Anuj Shrestha, and Tuesday Smillie—to expand and redefine the aesthetics of science fiction by creating posters that refer to a group of important, influential films largely outside the Western canon.