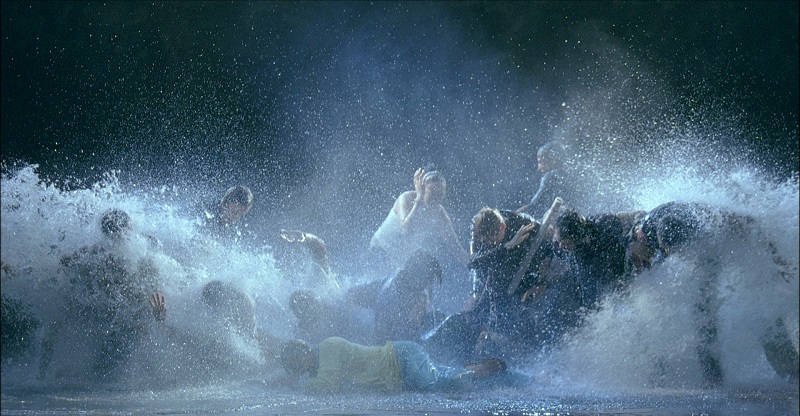 The Raft was created by Viola in 2004 as a commission for the Athens Olympics. In this work, a group of 19 people are dramatically subjected to physical forces of nature.

The 10-minute piece visually represents a moment of disaster and its aftermath, as experienced by a cross-section of humanity. Created on-set with actors and stunt people, the action is described by the artist as follows: A group of 19 men and women from a variety of ethnic and economic backgrounds are suddenly struck by a massive onslaught of water from a high-pressure hose. Some are immediately knocked over and others brace themselves against the unprovoked deluge. Water flies everywhere, clothing and bodies are pummeled, faces and limbs contort in stress and agony against the cold, hard force. People in the group cling to each other for survival, as the act of simply remaining upright becomes an intense physical struggle. Then, as suddenly as it arrived, the water stops, leaving behind a band of suffering, bewildered, and battered individuals. The group slowly recovers.

Viola comments, “I wanted to make a piece for our time in which nobody gets killed; people withstand the onslaught, and they get back on their feet and they go at it again.”

Read our post about The Raft in our Art Things Considered blog.