Savannah College of Art and Design (SCAD) Museum of Art 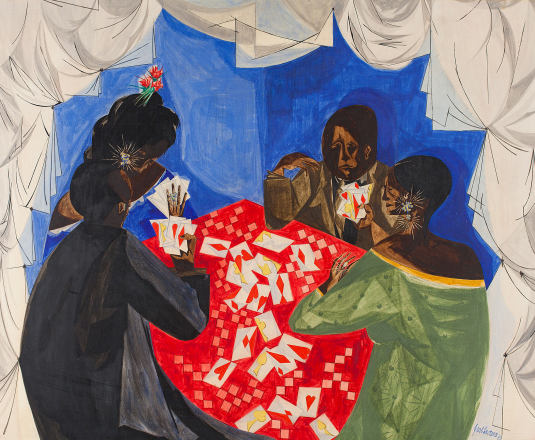 The SCAD Museum of Art and the Jacob and Gwendolyn Knight Lawrence Foundation present "Lines of Influence," a group exhibition to commemorate the centennial celebration of the birth of acclaimed painter, storyteller, educator and chronicler of the mid-20th-century African American experience, Jacob Lawrence.

"Lines of Influence" features a diverse selection of historical and contemporary artists in a multifaceted experience spanning three galleries within the museum. The first section of the exhibition, "Relations," details how mentors, historically important artists, contemporaries and the artist’s inner circle impacted his practice. Though Lawrence arrived at his distinctive formal language early in his career, the engagements that shaped his personal and professional life remain evident. As such, the exhibition eschews chronologies and focuses on the intimate relations inside and outside of the studio with artists and artwork that contributed to his oeuvre.

The curatorial approach emphasizes a contextually rich and widespread ground for the reading of Lawrence’s work. During his lifetime, Lawrence occupied an interstitial position in the art world. He was considered both an insider and outsider, caught in a racially divided environment and edged to the margins of American modernism despite significant early exhibitions at renowned institutions such as the Museum of Modern Art and features in national press outlets. This exhibition will make strides to unravel such categorizations.

"Lines of Influence" is accompanied by a symposium, an exhibition catalog and a curriculum guide that ties the exhibition with the National Core Arts Standards and can be used by educators in the galleries and beyond. Drawing from a 2015 symposium hosted by the SCAD Museum of Art, this exhibition builds on the rich framework presented by leading Jacob Lawrence scholars and artists for the presentation of new perspectives on the life and work of the artist.