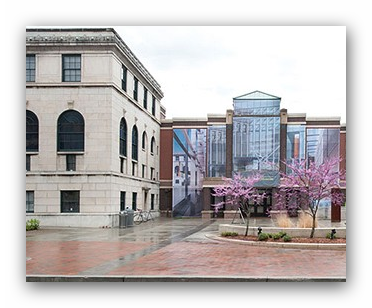 William Waldo Dodge Jr. first arrived in Asheville in 1919 to recuperate at U.S. Army General Hospital No. 19, which had opened in 1918 to serve those wounded in World War I. Already a young architect educated at The Massachusetts Institute of Technology, Dodge learned silversmithing under one of his occupational therapists Margaret Wheeler Robinson, his future wife. In 1922 the couple briefly moved to Connecticut so that Dodge could receive treatment for lingering respiratory issues at the Gaylord Farm Sanatorium. There he and Margaret helped to establish the Gaylord Silvercraft workers—a program which offered patients a new source of income after recovery. Several utensils in the exhibition were created during this period, and the Hand Wrought Spoon bares the registered trademark of Gaylord Silvercraft on the handle.

The couple returned to Asheville in 1923 and Dodge opened a modest studio on the property of their Charlotte Street home (now demolished). Several talented silversmiths apprenticed and worked alongside Dodge and for his growing company, including Johnny Green and Ray Yeomans, whose work is featured in this exhibition. Crafted by hand and bringing beauty to everyday objects, Dodge silver exemplifies the spirit of originality and individuality valued by artists of the Arts and Crafts Movement.

An innovative craftsman, Dodge often invented new tools and techniques to execute his unique designs. Footed Bowl with Acanthus Leaf Decoration features one of his most attractive forms, created using a patented hammering technique which he termed “Waterfall.” Furthering the drama of the silver, Dodge articulated the foot of the bowl through a band of acanthus leaves, a nod to the inspiration he drew from classical Greek and Roman architecture.

Dodge’s designs brought the Arts & Crafts movement into the homes of many local and regional residences. He had a keen marketing sense, catering to consumers of all ages by producing a wide array of objects spanning from jewelry pieces like the Dogwood Bracelet and Brooch, to accessories like the Matchbox and Bill Clip. The hammered Baby Spoon with a bunny cut-out on the handle and the Small Porringer were common Christening gifts.

Dodge’s objects often incorporated dramatic and decorative elements. The two Pitchers, Sugar Bowl with Dolphin Fin Lid, and Sugar Tongs each employ an aquatic creature motif. The ebony handles of the Pitchers are evocative of a dolphin leaping from the ocean, while the modestly scaled sugar tongs picture two companion whales expelling water.

Dodge’s playful and striking designs captured the attention of collectors for decades after the boom of the Arts & Crafts movement. In 2016, the Asheville Art Museum received a major gift of 84 silver objects from the Dodge family and now has the most comprehensive public collection of Dodge silver in the world.