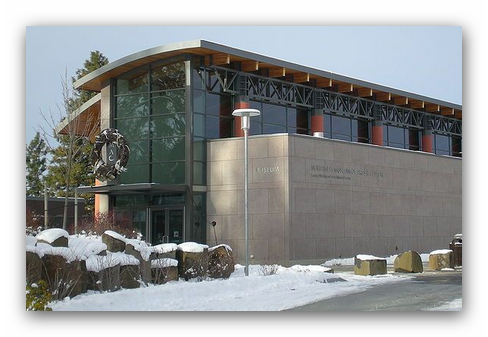 Over 100 photogravures included in this exhibition are a representative sampling of Edward S. Curtis' monumental attempt to record all aspects of American Indian culture. Selected from the 2,500 plates in The North American Indian: 1907-1930, the plates in this display reveal the rich diversity of lifestyle and environment found among the tribes Curtis studied.

Among the most awesome images in the Curtis collection are his landscapes, which underscore the majesty endemic to the various regions. "In the Klamath Forest," and "Quiet Yorok Waters," transport the viewer in both time and space and bespeak the reverential attitude of the American Indian toward his environment.

The importance of tribal ceremonies and the elaborate nature of costumes are revealed in works such as "Honovi-Walpi: Snake Priest with Totokya Day Painting" and "Water Rite Purification, Cheyenne Animal Dance." The more mundane aspects of everyday living are depicted in such prints as "Pottery Burners at Santa Clara" and "Fishing from Canoe."

The striking portraits, such as "The Old Warrior," heighten the impact of this display by projecting the dignity and pride of a people confronted with periodic displacement and relentless social change. Also on display will be many fine examples of basketry from each of the tribes represented in this 150 year celebration.

Whether or not you go, Edward S. Curtis: One Hundred Masterworks showcases Edward Curtis's most compelling and important works. This beautiful publication highlights both iconic and rarely seen images, demonstrating his artistry and mastery of photographic mediums, and his commitment to documenting and preserving for posterity the Native Americans’ traditions and ways of life.

Widely acknowledged as the world’s leading authority on Edward Curtis, author Christopher Cardozo has curated a groundbreaking monograph on internationally renowned photographer Edward Curtis. Curtis’s magnum opus, The North American Indian, the most extensive photographic portrait of Native Americans, is a crucial contribution to the history of America’s Native peoples as well as a testament to his tireless efforts to document and express the spirit of over eighty distinct tribal groups.

In this book Cardozo selected  vintage photographs from an unmatched private archive of rare and unique Curtis original. Never before have Curtis’s finest photographs been presented with such fidelity and power in book form. Every style, subject matter, cultural and geographic area, and print medium Curtis worked in is included. The stunning photographs are further enriched and contextualized by essays from world-recognized experts. Creating a unique visual mosaic, the photographs give the viewer a deep, rich understanding of Curtis’s accomplishments as an artist, while exploring the crucial role the Native American participants played in co-creating this iconic body of work.