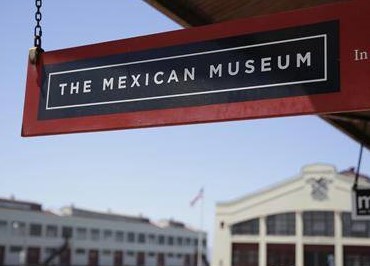 In partnership with the Secretaría de Relaciones Exteriores de México and the Consulate General of Mexico in San Francisco, The Mexican Museum is proud to present the exhibition, Tramas Urbanas (Urban Patterns), featuring the textural work of acclaimed Mexican visual artist Paloma Torres. Created over the last three years as part of the Sistema Nacional de Creadores de Arte (SNCA; National System of Art Creators), Tramas Urbanas is a visually provocative collection of abstract sculptures and handmade textiles based on a series of aerial photographs the artist took over Mexico City.

As Torres looked down on the city, she noticed the absence of green spaces and the saturation of informal constructions. Her first mental image was that of a large rug placed over the mountains that surround the Valley of Mexico. Her images - from aerial portraits of irregular settlements that surround Mexico City to a sort of urban archaeology that discovers small objects that allow the megalopolis to function – became the inspiration for Tramas Urbanas, and captured a new reality of today’s sprawling urban environments.

For the very elaborate techniques used for creating the felt textiles, Torres worked with natural elements, including fibers and wool from different regions of the world, as well as dyes based on those used in Mexico’s pre-Hispanic cultures. In contrast to a vision of a world where everything is thrown out, Torres’ work also involves leftover textiles and building materials. This blend has allowed her to realize that humanity is advancing thanks to the intersection of cultures. The subsequent diversity contributes to the growth of different societies, including contemporary Mexico City.