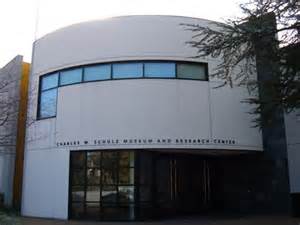 In spite of his popularity with fans, Pig Pen was featured in just over 100 of the 17,897 Peanuts comic strips that Schulz created. Generating new storylines suited to Pig Pen’s messiness proved challenging for Schulz, who explained, “Usually, I just run out of ideas for him, but somehow he keeps hanging in there.” From his 1954 debut, to his last appearance in 1999, Pig Pen evolved in the way that Schulz portrayed his dirtiness. Through a display of original sketches, comic strips and ephemera, discover the creative ways Schulz brought Pig Pen, with his cloud of dust in tow, into the world of Peanuts.

Whether or not you go, Messy Like Pigpen (Peanuts) follows the trail of one of Schultz's favorite characters in this children's book loved by adults. Think you’re messy? Meet Pigpen, the messiest kid in the Peanuts gang, in this inspiring new board book that comes with a “Messy like Pigpen” sticker badge!

Are you or someone you know messy like Pigpen? Are you surrounded by your own personal cloud of dirt? Don’t worry, dust magnets…you’re not alone! In this charming new board book, like-minded kids and adults will rejoice in having a friend like Pigpen who makes anyone look pristine by comparison!

But sometimes being dirty isn’t all it’s cracked up to be. One day, Pigpen decides to do something he usually avoids like the plague: take a shower! Will the fabulously filthy Pigpen we know and love be gone forever? Luckily for Peanuts fans, Pigpen never stays clean for long…