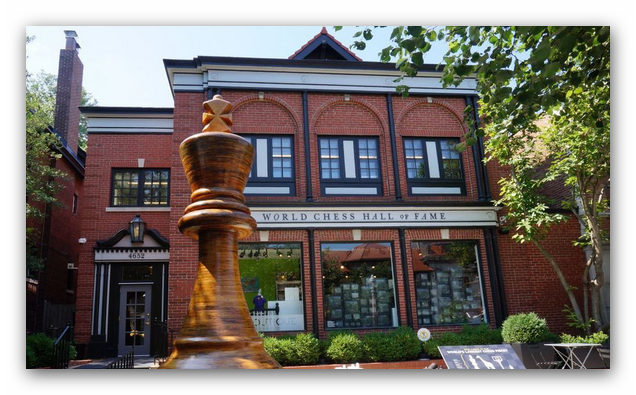 The groundbreaking 1944 exhibition The Imagery of Chess sought to challenge the general conventions of the ancient game.

Organized by Marcel Duchamp, Julien Levy, and Max Ernst, the show included the work of over 30 painters, photographers, sculptors, critics, and composers, among others. Each created artwork or performances inspired by and challenging preconceived notions of chess. Though a few of the participating artists—Alexander Calder, Man Ray, André Breton, and the organizers—were well known at the time, others such as Matta, Arshile Gorky, Robert Motherwell, and John Cage would emerge as significant figures in the second half of the 20th century. The highly publicized exhibition was well received by the chess, art, and general communities, and the project went on to inspire artists over the last 70+ years to reinterpret the game in an artistic way.

With a mission to interpret the game of chess and its cultural and artistic significance, the World Chess Hall of Fame was honored to celebrate the history of the 1944 show in Fall 2016/Winter 2017 in Designing Chessmen: A Taste of The Imagery of Chess, by showcasing some of the original artwork and reproductions of pieces from the original exhibition. We are now proud to present The Imagery of Chess: Saint Louis Artists, featuring 20 leading local artists, writers, designers, musicians, and composers and their newly commissioned artwork and performances inspired by the game of chess.