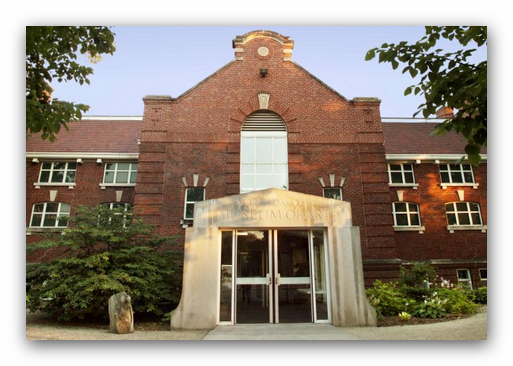 In 1941 the U. S. Justice Department converted Fort Lincoln from a surplus military post into an internment camp to detain people arrested in the United States as enemy aliens. Over its five-year operation as a camp, the Bismarck facility housed about 1,500 men of German nationality, and over 1,800 of Japanese ancestry. The first group of Japanese and German men were arrested by the FBI in the days immediately after Pearl Harbor. The arrests were done under the authority of the Alien Enemies Act, and these so-called "enemy aliens" were removed from their homes, primarily on the West Coast and East Coast, and sent to camps in isolated parts of the country.

Snow Country Prison: Interned in North Dakota opened October 4, 2003, in Bismarck at the site of the former camp, now United Tribes Technical College. The exhibition examined the internment experience of German and Japanese nationals, as well as Japanese American citizens deemed "enemy aliens" following the renunciation of their citizenship during World War II.

The exhibition, curated by Laurel Reuter, Director of the North Dakota Museum of Art, and organized jointly by the Museum and the United Tribes Technical College, featured historic photos and murals of the camp, floor-to-ceiling cloth banners imprinted with images of people interned there, and wall text drawn from the haiku poems of one of the Japanese internees, Itaru Ina, the father of Dr. Satsuki Ina, a consultant to the exhibition.