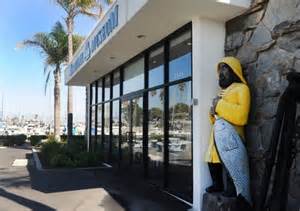 The Channel Islands Maritime Museum presents Love Letters Home, an exhibition that explores different ways in which sailors and soldiers corresponded with their loved ones waiting back home. This exhibit features letters written by Donald Brug, a Ventura native who enlisted in the Army during the 1950s, and later sailed around the world during the 1960s. CIMM is also proud to display artifacts on loan from the U.S. Navy Seabee Museum in Port Hueneme. On display are various pieces known as “trench art”, objects made by sailors from found or recovered materials. The Seabees will celebrate their 75th anniversary in March 2017.

In the not-so-distant past, hearing from a loved one could take days, months, or even years. Separation and the longing it produced was an ever-present reality for these men, women and children of both maritime and wartime families. Letters and objects sent back home became a means of remembrance for separated families. This exhibit explores the common themes found in correspondence from sailors in the past and today: loneliness, separation, hardship, and endurance. These letters, along with mementoes, gifts, and souvenirs serve as keepsakes and reminders of affection and love over the miles.