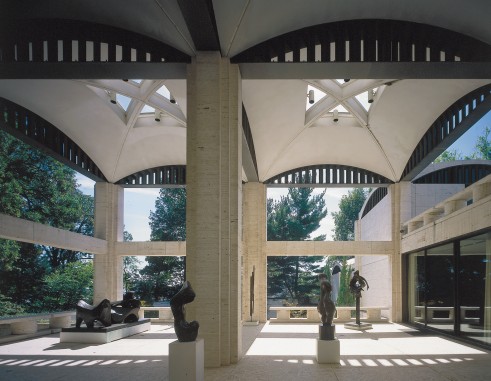 To celebrate the opening of the National Museum of African American History and Culture in September 2016, The Kreeger Museum presents selected works from the permanent collection by Sam Gilliam and Simmie Knox. The Museum's relationship with both artists dates back to the early 1970s when David and Carmen Kreeger purchased their works.

Sam Gilliam:   The Kreeger Museum opened in 1994; the first exhibition at the Museum was Sam Gilliam 3-D (1998). John Beardsley, guest curator of that exhibition, wrote of Gilliam: "He is among the nation’s most accomplished abstract painters. Over the decades, he has not wavered in his commitment to a rigorous but exuberant modernist style..."

Simmie Knox: In 1971 David and Carmen Kreeger purchased a work by Simmie Knox which had been shown in the Thirty- Second Biennial Exhibition of Contemporary American Painting at Corcoran Gallery of Art. This early abstract diptych by Knox illustrates his love of color and the movement of color.

Whether or not you go, Sam Gilliam: A Retrospective offers insight into Sam Gilliam, who established himself as a major artist in 1968 when he jettisoned the wooden stretcher bars that had previously determined the shape of his paintings and allowed his vivid, sometimes ecstatic, rushes of color-stained canvas to hang, billow, and swing through space. Yet Gilliam's contributions to art history extend far beyond these often monumental and always dramatic works. In this volume, the first in-depth book devoted to this major figure, Corcoran Gallery of Art Curator of Contemporary Art Jonathan P. Binstock explores four decades of work and establishes the artist’s place in the history of post-1960s art. Binstock’s wide-ranging and provocative inquiry into Gilliam’s groundbreaking achievements as a modernist and as an African American artist is supported with a wealth of beautifully produced illustrations—both full-color and black-and-white—as well as an annotated and illustrated chronology and an exhaustive bibliography. This thoughtful exploration and appraisal of Gilliam’s extraordinary oeuvre places the artist at the forefront of American abstract art.