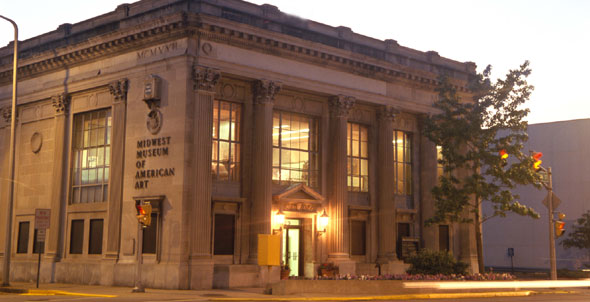 To commemorate and preserve our awareness of the Holocaust the MMAA has mounted a spotlight exhibit of works from the Permanent Collection. Adam Grochowski Grant (1924-1992) survived Auschwitz and Mauthausen concentration camps due to is innate abilities as an artist to entertain and subdue the wrath of his captors. He later arrived in America, changed his name, and tried to fulfill his aspirations to become an artist and help others see the world through the healing powers of art. He became a well known Toledo-based artist along with his wife Peggy (Brennan) Grant (b. 1932- ). Adam’s work today is heralded by his native country of Poland and has become a part of the Auschwitz Museum collection. You can see the painting, “Harlequin & Model”, 1979, by Adam Grant, and a portrait of the artist and their first-born son, Tom, titled, “In the Studio”, 1964, by Peggy Grant now on display.

From the museum’s Tuck Langland Study Collection comes seven bronze heads the sculptor created as a proposal to commemorate the tragedy of the Holocaust. One of these poignant and sensitively modeled heads depicts a portrait of Anne Frank.

The MMAA will be the site for a 12-day exhibit of an informational display about the Anne Frank story as a collaboration with the Elkhart Community Schools and Premier Arts starting February 17 thru March 1.