Found in Translation: Design in California and Mexico, 1915–1985 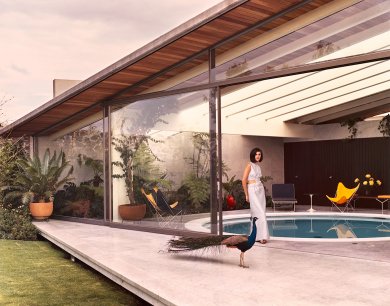 Found in Translation: Design in California and Mexico, 1915–1985 is a groundbreaking exhibition and accompanying book about design dialogues between California and Mexico. Its four main themes—Spanish Colonial Inspiration, Pre-Columbian Revivals, Folk Art and Craft Traditions, and Modernism—explore how modern and anti-modern design movements defined both locales throughout the twentieth century.

Half of the show’s more than 300 objects represent architecture, conveyed through drawings, photographs, films, and models to illuminate the unique sense of place that characterized California’s and Mexico’s buildings. The other major focus is design: furniture, ceramics, metalwork, graphic design, and murals. Placing prominent figures such as Richard Neutra, Luis Barragán, Charles and Ray Eames, and Clara Porset in a new context while also highlighting contributions of less familiar practitioners, this exhibition is the first to examine how interconnections between California and Mexico shaped the material culture of each place, influencing and enhancing how they presented themselves to the wider world.

Whether you go or not,  the exhibition catalog, Design in California and Mexico, 1915-1985: Found in Translation, looks at the influence California and Mexico have had on each other’s architecture and design in the 20th century. The histories of Mexico and the United States have been intertwined since the 18th century, when both were colonies of European empires. America’s fascination with Mexican culture emerged in the 19th century and continues to this day. In turn, Mexico looked to the U.S. as a model of modernity, its highways and high-rises emblematic of “The American Way of Life.”

Exploring the design movements that defined both places during the 20th century, this book is arranged into four sections― Spanish Colonial inspiration, Pre-Hispanic Revivals, Folk Art and Craft Traditions, and Modernism. Featured are essays by leading scholars and illustrations of more than 300 works by architects and designers including Richard Neutra, Luis Barragán, Charles and Ray Eames, and Clara Porset. The word translation originally meant “to bring or carry across.” The constant migration between California and Mexico has produced cultures of great richness and complexity, while the transfers of people and materials that began with centuries-old trade routes continue to resonate in modern society, creating synergies that are “found in translation.”

Design in California and Mexico, 1915-1985: Found in Translation