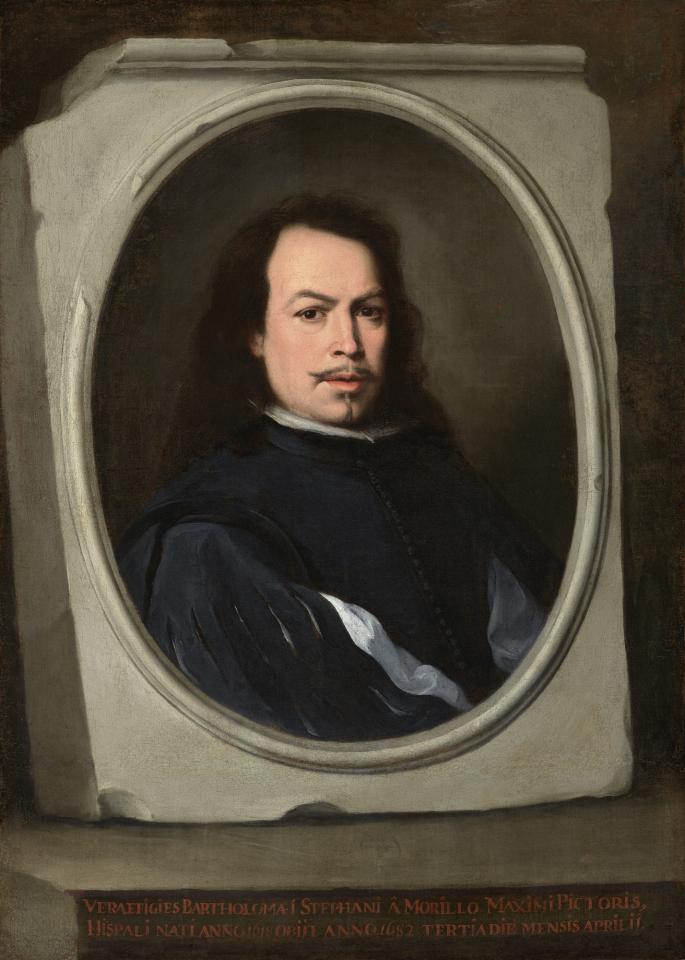 One of the most celebrated painters of the Spanish Golden Age, Bartolomé Esteban Murillo worked primarily in Seville, where he was born in December 1617, until his death in 1682. Well known for his religious paintings and his extraordinary depictions of street urchins, he was also an ingenious painter of portraits. This genre remains, however, the least studied aspect of his work. Inspired by the self-portraits in their holdings, New York’s Frick Collection and London’s National Gallery  co-organized the show to mark the 400th anniversary of this great artist’s birth. Murillo: The Self-Portraits is jointly organized by the Frick’s Peter Jay Sharp Chief Curator Xavier F. Salomon and Letizia Treves, Curator of Later Italian, Spanish, and French 17th-Century Paintings, National Gallery.

In 1682, an inventory of the possessions of Gaspar Murillo, the painter’s son, lists the following: “Item. Another canvas of the portrait of Don Bartholome Murillo with its legend below and its frame completely gilded at three hundred reales. Item. Another portrait canvas of said Don Bartholome Murillo made by his own hand of a bar and a third with its frame of gilded adornments and half a cane bid on at three-hundred and seventy and five reales.” These two self-portraits are the only known images of the painter by his own hand. The first one, recently acquired by The Frick Collection, was painted about 1650–55, while the second, now in The National Gallery, London, is from about 1670. The two portraits have not been seen together since at least the early nineteenth century.

To provide context to these canvases, the exhibition will also feature a group of fifteen other works on loan from international private and public collections. These will include paintings of other sitters by Murillo, as well as later reproductions of the two paintings that reflect their fame in Europe.

Whether you go or not, the exhibition catalog, Murillo: The Self-Portraits, brings together the only two known self-portraits by Bartolomé Estebán Murillo (1617–1682), one of the finest painters of the Spanish Golden Age. Painted almost twenty years apart, these two remarkable paintings are often overshadowed by Murillo’s more famous religious paintings and genre scenes. This book investigates the two self-portraits side by side, highlighting similarities and differences. While the earlier portrait reflects Murillo’s admiration of antiquity and imitation of classical models, the later one shows a confident, mature artist who was at that time the leading painter in Seville. In addition, the book discusses recent technical analysis, offering a better understanding of how these self-portraits were painted, and provides a rare opportunity to compare how one of the most celebrated and influential European painters chose to represent himself at different stages of his exceptional career.

Select Murillo: The Self-Portraits to learn more or to place this book in your Amazon shopping cart