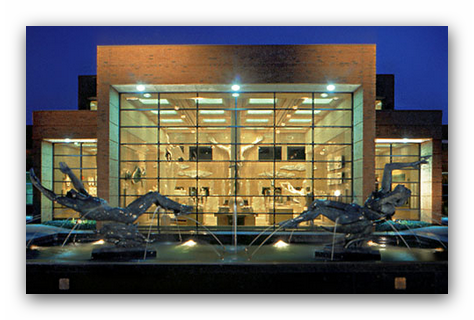 from the Dubuque Museum of Art

Forty original photogravure prints by noted photographer and naturalist Edward S. Curtis -- from the collection of the Dubuque Museum of Art in Dubuque, Iowa -- present an overview of Curtis’s The North American Indian collection with a popular mix of famous images like “Geronimo” and “Cañon de Chelly – Navaho” and just as iconic but less well-known images like “Bear Bull – Blackfoot” and “Wichita Grass-House”

Edward S. Curtis was fortunate in 1906 to gain recognition and endorsement from President Theodore Roosevelt and financial backing from John Pierpont Morgan for a project he had been considering for over six years. Curtis approached industrialist Morgan and together they decided Curtis’s masterwork, The North American Indian, would be a five-year project producing 20 volumes of ethnographic texts illustrated with high-quality photoengravings and each volume would be accompanied by a folio of large photogravure prints. In the end, the 20 folios included 722 photogravure prints but the project took 30 years to complete.

Curtis published Volume 1 in 1907. Although Curtis had hoped to print a limited edition of 500 copies, he was only able to find 222 subscribers for The North American Indian and only 272 sets were ever printed. Mainly due to lack of funds and the constant need for marketing his work, Curtis did not issue his final volume and portfolio set until 1930, almost 20 years after his projected completion date. Thus, his lifework, The North American Indian, which neither fit neatly into the classification of art nor science, virtually faded into obscurity. The collection was rediscovered in the 1970s and became recognized as one of the most significant records of Native culture ever produced.

Whether or not you go, The North American Indian: The Complete Portfolios gathers Curtis’ entire American Indian portfolio into one publication, offering renewed access to and appreciation of his extraordinary achievement, which is as much a precious historical document as a triumph of the photographic form.