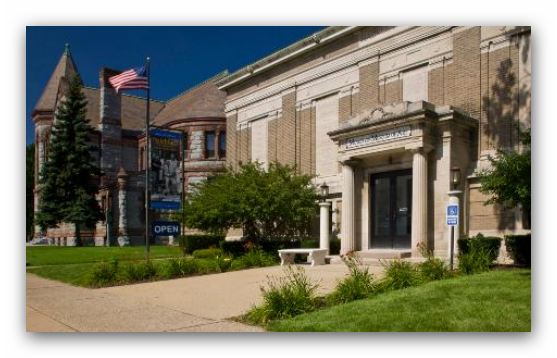 Expressions of Faith combines the written and printed word with the visual arts to examine the impact that religious faith has made on artists who, in turn, helped disseminate and form various belief systems. In giving visual form to religious figures and stories, artists shaped how believers perceived their faith, and in doing so influenced the evolution of the religion itself. Outside of the practice of faith, images of Christ and the Nativity, of Greek gods and goddesses, of Hindu deities such as Kali and Ganesh, and the Jewish Menorah are still immediately recognizable in our shared popular culture.

The majority of the artworks in Expressions of Faith are drawn from the permanent collection of the Muskegon Museum of Art. The exhibition includes imagery from Christianity, Islam, Judaism, Hinduism, and African and Japanese spiritual traditions.

The exhibition also features a loan from the Van Kampen Foundation Scriptorium, a collection of ancient, Medieval and early Renaissance manuscripts and books. The Foundation has lent both hand-copied and printed Bibles, including those illustrated by Lucas Cranach the Elder.

The display will include a rare showing of a Torah from the Temple B’nai Israel of Muskegon and additional artworks and Bibles from the Holland Museum, Center Gallery at Calvin College, and other private and institutional lenders.