The Art of Rube Goldberg 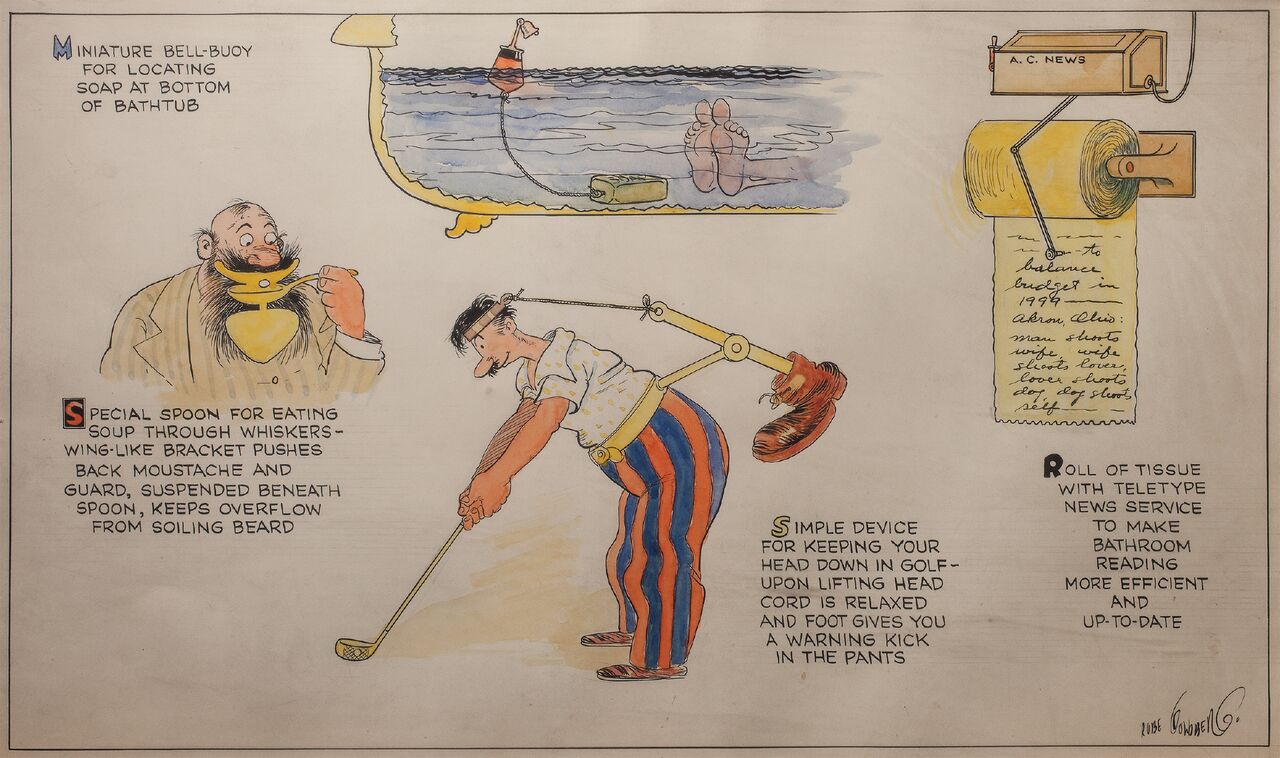 The Art of Rube Goldberg is the first comprehensive survey exhibition in nearly 50 years that demonstrates the artistic talent and endless imagination of the legendary American cartoonist and illustrator, Rube Goldberg (1883-1970). Celebrated for his graphic techniques, enduring characters, and especially for his invention drawings, Goldberg is an American cultural icon whose influence is still felt in all aspects of culture. The Art of Rube Goldberg brings together more than 75 drawings, photographs, sketches, and animated films—as well as rare personal photographs and memorabilia from the Goldberg family archives—to trace the creative process and bring to life one of 20th century America’s most wildly talented innovators.

The exhibition traces Goldberg’s creative growth and process over a remarkable 70-year period, journeying from a rare early drawing, through his syndicated strips of the 1920s and 30s, to his influential later works. More than thirty of Goldberg’s iconic invention drawings are featured in the exhibition. These remarkable illustrations feature Goldberg’s trademark: overly complicated chain-reaction machines designed to perform simple tasks, or, as Goldberg put it, “a symbol of man’s capacity for exerting maximum effort to achieve minimal results.” Remarking on Goldberg’s broad cultural reach, noted art critic Adam Gopnik has stated, “Goldberg’s cartoons touch the edge of modern art.”

Rounding out the exhibition are a selection of commercial and artistic projects that demonstrate Goldberg’s broad reach and popular appeal for later generations, including the band OK Go’s music video “This Too Shall Pass – Rube Goldberg Machine Version,” and highlights from the 2009 documentary film Mousetrap to Mars, which profiles the annual Rube Goldberg Machine Building Contest.

Whether or not you go, in The Art of Rube Goldberg: (A) Inventive (B) Cartoon (C) Genius, Rube Goldberg's grand-daughter considers all aspects of his career, from his very first published drawings in his high school newspaper and college yearbook to his iconic inventions, his comic strips and advertising work, and his later sculpture and Pulitzer Prize–winning political cartoons. Also included are essays by noted comics historians, rare photographs, letters, memorabilia, and patents, many reproduced here for the first time. This coffee table book is designed and packaged to capture the inventive genius of this cartoonist, humorist, sculptor, author, engineer, and inventor.

Select The Art of Rube Goldberg: (A) Inventive (B) Cartoon (C) Genius to learn more or to place this book in your Amazon shopping cart.