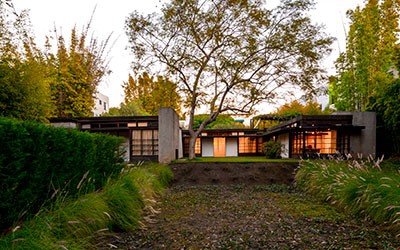 Overlaps in the distinct practices of the two participants—especially in their treatments of history—are identified and enhanced via the sculptures, film, and photographs installed throughout the Garage Top space. Yang presents his film The Age of Guilt and Forgiveness (2016) as an attempt to look at Hiroshima seventy years after the end of World War II, highlighting the burden of history in the context of contemporary Japan. Balanced with Yonemoto’s Made in Occupied Japan (1998-ongoing)—eight porcelain figurines of imperial era Europeans with accompanying colonized peoples—and his photographs showing Asian men wearing U.S. Civil War uniforms from both armies, North South East West (2007), a viewer is pulled into considering how history is something constantly being edited and re-written in the present.

Yang’s film is shown within the installation A Maze and Observatory as a Memorial to the Past, which references the Hiroshima Peace Memorial Park and the Jantar Mantar observatory in Jaipur, India. The large-scale staircases and pedestals are counterbalanced by Yonemoto’s sculptural works of Kintsugi, the art of fixing broken pottery with a lacquer resin infused with powdered gold that the artist has adopted for broken contemporary objects and mass-produced commodities—an act of rebirth, renewal, and reconsideration in line with any other historical endeavor.