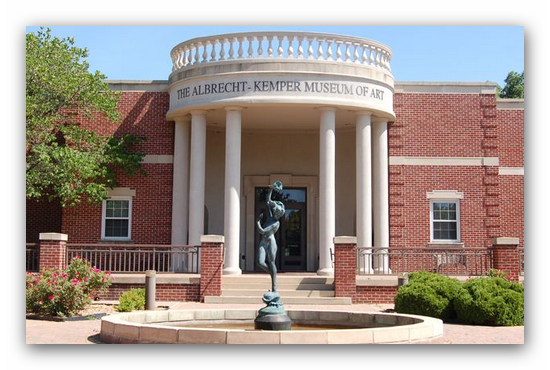 In the 1930s and ’40s, printmaking enjoyed a new popularity across the nation, and Kansas City proved no exception. The Kansas City Art Institute’s (KCAI) curriculum added print courses in lithography first under Ross Braught (1898-1983) around 1931 through 1935. Thomas Hart Benton (1889-1975) was hired as his replacement as head of the painting program but he also brought printmaker John DeMartelly (1903-1979) on to the faculty to encourage students to give lithography, blockprinting, and intaglio mediums a try, as well as participate in the New York City-based Associate American Artists (AAA). DeMartelly was a natural teacher, inspiring a generation of young artists to try the absorbing techniques.

his exhibition will highlight the work of DeMartelly and include many examples of his prints and paintings. Other works in the show feature the many students guided into their own careers in printmaking, such as Janet Turner (1914-1988), Jackson Lee Nesbitt (1913-2008), Duard Marshall (1914-2010), and William Wind McKim (1916-1995), who took over KCAI’s printmaking program at the close of World War II. The KCAI’s annual “Midwest Art Exhibition” sponsored graphic arts division prizes that attracted artists from around the regional to submit prints in every medium. Wide interest in printmaking led to new organizations being founded in Kansas City, such as the Woodcut Society begun in 1932 and the Miniature Print Society founded in 1936, which drew artists such as Clare Leighton (1898-1989) and Lyman Byxbe (1886-1980) to participate. About twenty artists will be represented in this exhibition, drawn from the Moffett Collection of Kansas City.