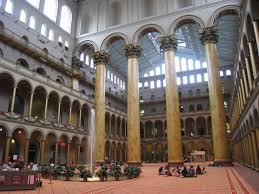 For the past decade, much of this National Historic Landmark, a sprawling campus of 19th- and 20th-century structures, was closed to the public. Recent efforts to redevelop the St. Elizabeths site have created new opportunities to access and understand its rich architectural legacy, as well as its potential to revitalize one of the city’s most underserved wards.

In concert with this massive transformation, the National Building Museum presents an exhibition that explores the architecture and landscape architecture of St. Elizabeths. The Government Hospital for the Insane, as the campus was originally named, opened in 1855 as a federally-operated facility. The multi-disciplinary exhibition will tell the story of St. Elizabeths’ change over time, reflecting evolving theories of how to care for the mentally ill, as well as the later reconfiguration of the campus as a federal workplace and mixed-use urban development.

An important collection of architectural drawings held by the Library of Congress will anchor the exhibition. These archival materials comprise plans and elevations spanning the period from the 1850s through the 1980s. Drawings include Thomas U. Walter’s plans for the institution’s first structure, the 1855 Center Building, as well as plans for later residential “cottages,” farm structures, and an auditorium. A spectacular 1904 model created for the St. Louis World’s Fair is a dramatic centerpiece for the exhibition.

Supplementing drawings and models will be a wide variety of objects, from medical instruments to patient-created art, introducing visitors to the people who lived and worked at the institution. Photographs, scrapbooks, furnishings, and paintings appear on loan from various museums and archives.

The Architecture of an Asylum will present a remarkable story about American healthcare, architectural history, and promising adaptive reuse. Under the General Services Administration’s control since 2004, the historic site—much of it vacant and deserted for decades—is now undergoing massive change. Visitors, always curious about the troubled history of mental health care, and interested in expansive plans for urban renewal, will be fascinated by the surprising story of this hospital and its urban campus.

Whether you go or not, The Architecture of Madness: Insane Asylums in the United States, tells a compelling story of therapeutic design, from America’s earliest purpose-built institutions for the insane to the asylum construction frenzy in the second half of the century. Generously illustrated, The Architecture of Madness is a fresh and original look at the American medical establishment’s century-long preoccupation with therapeutic architecture as a way to cure social ills.At the center of the author's inquiry is Dr. Thomas Kirkbride, a Pennsylvania-born Quaker, who in the 1840s devised a novel way to house the mentally diseased that emphasized segregation by severity of illness, ease of treatment and surveillance, and ventilation. After the Civil War, American architects designed Kirkbride-plan hospitals across the country. Before the end of the century, interest in the Kirkbride plan had begun to decline. Many of the asylums had deteriorated into human warehouses, strengthening arguments against the monolithic structures advocated by Kirkbride. At the same time, the medical profession began embracing a more neurological approach to mental disease that considered architecture as largely irrelevant to its treatment.

Elaborately conceived, grandly constructed insane asylums—ranging in appearance from classical temples to Gothic castles—were once a common sight looming on the outskirts of American towns and cities. Many of these buildings were razed long ago, and those that remain stand as grim reminders of an often cruel system. For much of the nineteenth century, however, these asylums epitomized the widely held belief among doctors and social reformers that insanity was a curable disease and that environment—architecture in particular—was the most effective means of treatment.