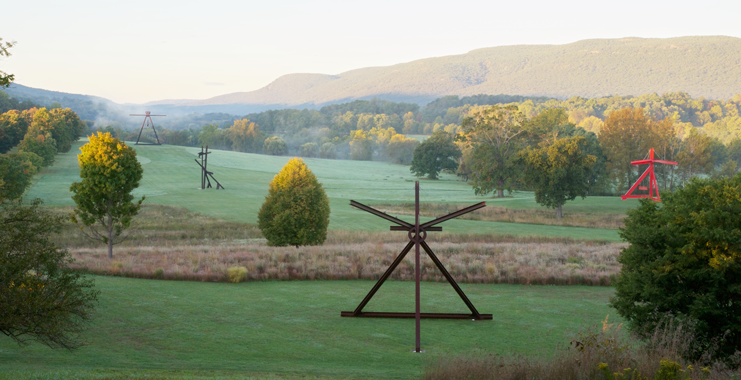 David Smith: The White Sculptures is the first exhibition to critically and fully consider the use of the
color white within David Smith’s works. At the time of the artist’s death in 1965, eight monumental steel
sculptures, painted white, stood in the fields surrounding his home and studio. The White Sculptures will
be the first public presentation to unite the entire Primo Piano series: Primo Piano I, II, and III, all from
1962. The exhibition will also feature a selection of Smith’s earliest constructions, created out of white
coral gathered by the artist during his stay in the Virgin Islands from 1931-32, and rarely shown since.

David Smith (1906-1965) was an American artist whose groundbreaking sculptural work forged links to
surrealist, abstract expressionist, and postmodern styles. Beginning in the 1950s, and on an increasing
scale in the 1960s, Smith began to incorporate open space and employ white both as color and structure in
large outdoor sculptures and in spray-painted drawings and paintings.
From the late 1940s on, Smith installed groups of sculptures outside his home in the Adirondack
Mountains, contemplating and photographing them in all seasons against the sky, clouds, and surrounding
scenery. Seen in Storm King’s natural landscape, whose rolling hills approximate the geography of
Smith’s Adirondack property, David Smith: The White Sculptures will echo Smith’s commitment to
presenting art and nature as one.

David Smith: The White Sculptures will be accompanied by a fully illustrated publication, as well as a video that documents Smith’s career and his tremendous impact on his peers.