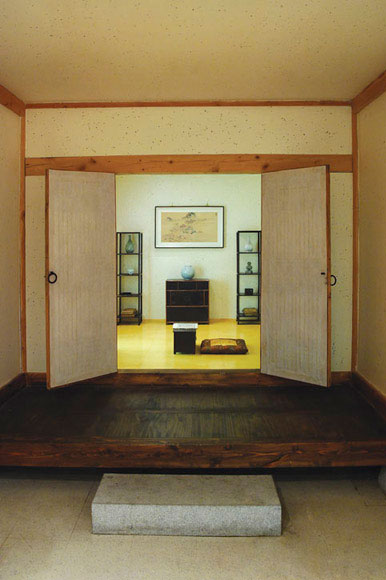 The Korean Cultural Center New York is pleased to present a special installation, Media Bowha (寶貨 - a treasure) by Hyegyung Kim in the Center’s unique space, the sarangbang, as part of the Call for Artists 2016 program.
Sarangbang (사랑방), a traditional Korean reception and study room, was a multi-use space for male scholars and noblemen in the Joseon Dynasty. The space involves various elements of traditional Korean culture. Nowadays, the use of the room is open to everyone and its use has expanded to a more interactive space. To reflect these changing interpretations of the sarangbang and to emphasize its communicative power, Hyegyung Kim has been selected to feature a work that engages with this specific room. While new technology of the times have been often reflected in handicrafts in the past, today’s state-of-the-art technology lies in media. Hyegyung Kim is a media artist who engrafts art and technology in her own individual way; the combination of today’s technology with traditional Asian art goes further by harmonizing opposing elements such as light and darkness, existence and non-existence, movement and static. The artist’s intention of showing the coexistence of the conflicting clauses is an invitation to the audience to breathe together with the art.
About the ArtistHyegyung Kim (b.1974, Seoul) works in traditional Asian art, visual multimedia design, and installation. She acquired MFA in Digital Media Design at Hongik University in 2011, and currently in a doctoral program in Visual & Multimedia Design at Hanyang University in Korea. Kim has been the subject of many exhibitions including Media “Between” (MEDIA間) at the Korean Cultural Center Osaka in 2014, and Philosophy in the Museum at Sangwon Museum of Art in 2013. She is also a recipient of 2015 New Art Wave International Artist Award.