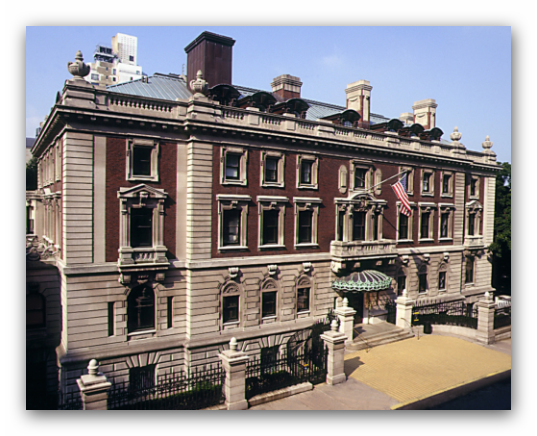 Passion for the Exotic is a series of exhibitions featuring Cooper Hewitt’s collection. This exhibition highlights works by Louis Comfort Tiffany (1848-1933) in the context of the Carnegie Mansion’s Teak Room designed by Tiffany’s former business partner Lockwood de Forest (1850-1932) in 1902. By this point, Tiffany and de Forest had collaborated on aesthetic interiors together and apart for over twenty years. Alongside a Tiffany dragonfly lamp owned by the Carnegie family and important loans of a Daffodil lamp, an inkwell box, and a fire screen from the collection of Richard H. Driehaus, this installation affords the visitor an opportunity to experience the interplay of Tiffany and de Forest’s designs as would have been possible in Andrew Carnegie’s era. Carnegie had a special appreciation for the artistic glass production of Louis Comfort Tiffany and during the years the Teak Room was in use, it was lit by at least four Tiffany table lamps and a turtleback chandelier from the center of the ceiling similar to the one lent to the exhibition courtesy of Macklowe Gallery. Tiffany’s chandelier would have given off a golden glow much like the yellow-lacquered stenciled walls designed by de Forest.

Tiffany’s tireless experimentation with new materials, motifs, and radiant hues is explored through a range of glass production. He was fascinated with many of the objects that both he and de Forest brought back from the Middle East, and that de Forest sent from India. The former provided ample sources for reinterpretation and inclusion in the designer’s creative output, as did the Indian brass and woodwork acquired from de Forest for some of his decorating schemes. Both men delighted in pattern, as can be seen by the harmonious combination of Tiffany’s work in de Forest’s setting.

America’s leading Aesthetic Movement champion of Indian design, designer and painter Lockwood de Forest (1850–1932) created the Teak Room, which served as the Carnegie family library. The room displays de Forest’s passion for the exotic, and defines his role in creating an Indian style of interior decoration in late nineteenth-century America. During this time collectors and painters flocked to the Middle and Far East for examples of extraordinary craftsmanship, inspiration for interior decoration, and unusual settings to paint. Lockwood de Forest travelled with American painter Frederic Church in Greece and the Middle East before setting out in 1881 to India. There, de Forest remained over a year establishing a studio guided by the Jain merchant Muggunbhai Hutheesing in the city of Ahmedabad.  In addition to overseeing de Forest’s studio, Hutheesing employed master craftsmen to create decorative teak wood and brass panels designed or approved by de Forest, which the designer then exported to the United States for his and Tiffany’s use in aesthetic interiors.

One of Cooper Hewitt’s greatest treasures, the Teak Room now hosts a series of special exhibitions dedicated to Lockwood de Forest and his peers. The room represents the most complete existing de Forest architectural interior in America still situated in the its original site. Its style is notably different from the rest of the house except for the trim of Andrew Carnegie’s bedroom, now a gallery in the Hewitt Sisters Collect exhibition next door. In the Teak Room, the Indian influence is evident in the patterned wall stenciling lacquered in yellow. It creates a golden light that is reminiscent of Indian latticed screens. Although the walls and ceilings were painted on canvas on site, the carved teak, including that of the built-in cabinet, came from de Forest’s studio in India, using primarily native designs that he adapted.