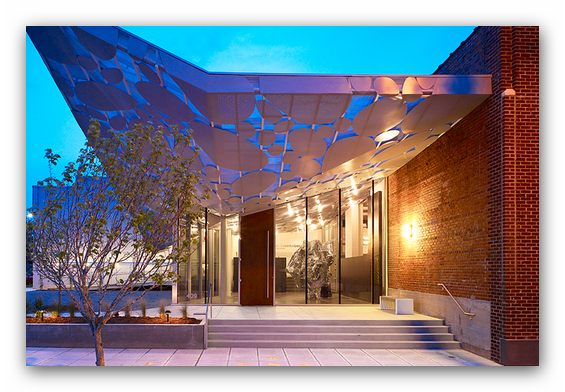 Oppressive Architecture presents the work of German-American artist Gesche Würfel. The exhibition explores the relationship between architecture and oppression during the historical eras of American slavery and German Nazism.

Würfel utilizes photography to examine the inhumane ways that prisoners were forced to live and labor on Southern plantations and in German concentration, labor, and death camps. The focus on architecture illuminates how German camps were built to achieve the political goal of extermination. In addition, architectural forms aided Southern plantations with commodity production, human reproduction, and social repression.

Oppressive Architecture explores how these architectural structures continue to influence the contemporary landscape, its inhabitants, and our understanding of history. The exhibition documents a wide range of remaining physical structures of oppression. In doing so, it recognizes their historic value and raises questions about how architecture can be used to commemorate and reconcile a country’s past.

The exhibition also includes a video of Below Forest, 110 miles northwest of Berlin, where 16,000 prisoners from the concentration camp Sachsenhausen and its sub-camps were forced to camp during the death marches between April 23 and 29, 1945 before being freed by the Red Army.

Würfel states “This exhibition brings together the different parts of my life; I am German, currently residing in the American South, and I am married to an African-American. I use this personal connection to establish my artistic response to both countries. In addition, connections and political inspirations between Germans and Americans have existed throughout history. The Tuskegee Institute in Alabama helped German West African colonies with cotton growing in the early 1900s. There were also close connections between the eugenics movements in the U.S. and the racial hygienicists in Nazi Germany in the 1930’s to early 1940’s. In addition, Hitler studied the American westward expansion and the destruction of Native Americans and their habitats.