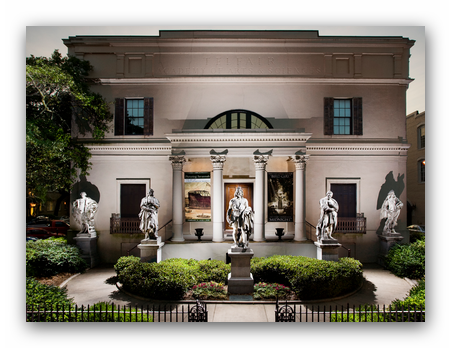 Face to Face: American Portraits from the Permanent Collection

Spanning the period from the American Revolution to World War II, the paintings in this exhibition demonstrate the broad range of American portraiture found in Telfair’s permanent collection. The exhibition begins with work by important early American portraitists Rembrandt Peale, Jeremiah Theus, and Henry Benbridge; subjects include Georgia patriots Noble Wimberly Jones and George Jones, as well as “surgeon of the Revolution” Dr. James Lynah. Iconic portraitist John Singer Sargent is represented with a portrait of Henry Augustus Cram.

The second portion of the exhibition features early 20th-century works, ranging from charming portraits of children by Charles Webster Hawthorne and Savannah’s Christopher A. D. Murphy to a compelling self-portrait by artist Mary Hoover Aiken.

Face to Face also marks debut of two exciting new acquisitions. James Wright (1716-1785) is the only known portrait of Georgia’s third and final royal governor. Wright served as governor of Georgia from 1760 to 1782, and his tenure included the turbulent years of the American Revolution. His royal governor’s mansion was located on the spot where the Telfair Academy now stands, and nearby Wright Square is named in his honor. Portrait of George Johnson Baldwin by Gari Melchers, recently donated by the great-grandson of the sitter, is a striking testament to Melchers’s mastery of portraiture and coloration. The sitter, George Johnson Baldwin, was a member of Telfair’s board during the early decades of its existence.