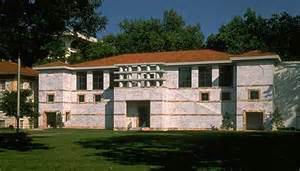 In Search of Noble Marbles: The Earliest Travelers to Greece

In the wake of the Fall of Constantinople in 1453, Greece became a province of the Ottoman Empire, until it succeeded in winning independence through arduous campaigns of the 1820s. In the words of one seventeenth century traveler, “[Greece] hath been near two hundred years under the dominion of the Turks and is very much depopulated.” Practically inaccessible to the Western world, with a hostile political regime, not to mention barriers of language and religion, only a very few brave travelers succeeded in traveling to Greece.

This exhibition brings together the earliest published accounts of intrepid English, French and Dutch explorers who, having visited Greece, were moved to record their experiences in print. These publications were often illustrated, and by the eighteenth and nineteenth centuries sometimes in a sumptuous manner. These also reveal an organic growth of knowledge about Greece, from seventeenth century fantasies familiar from Shakespeare’s Midsummer Night’s Dream, to the scholarly mapping out and minute recording of inscriptions and monuments. But interest in the ancient monuments was only one pursuit. The sheer difficulties of reaching Greece in early times meant that often groups of individuals travelled together under royal patronage, gathering information that also included natural history, and local customs and costumes.