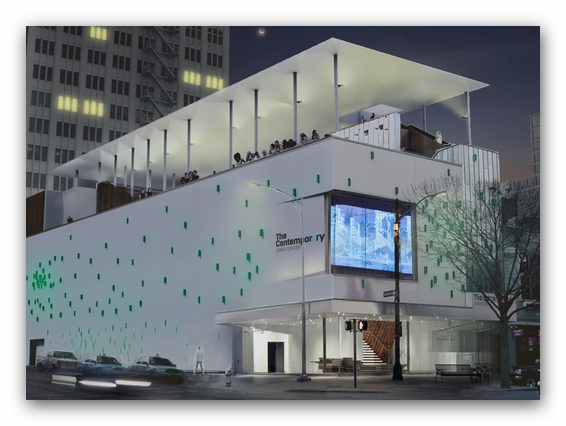 For Habitat at The Contemporary Austin – Jones Center, Sosnowska’s largest monographic exhibition to date at a U.S. museum, the artist has created an immersive, two-floor installation of dystopic domesticism. In the building’s lobby, Untitled, 2015, a gargantuan plantlike structure, pushes upward and outward, the illusion threatening to outgrow its glass containment. Beyond this, the entirety of the first floor features Antechamber, a labyrinthine series of constructed, angled walls, zigzagging through the building and reconfiguring the space. The interior resembles a confounding series of hallways, but with a twist: the walls are adorned with hand block-printed wallpaper depicting the delicate cream contrasts of an eighteenth-century floral Georgian Knot pattern. The interstitial, liminal presence of walls and passageways has a long trajectory in the artist’s work. Here, dynamic and surreal corridors become Sosnowska’s phenomenological response to an environment frozen in time. Individual doorways inserted in the wallpapered corridors lead to smaller, triangular rooms, each containing a single sculpture by the artist. From within each sub-room, the reverse side of the constructed walls reveal themselves as exposed and unfinished, replete with visible wall studs, allowing the viewer behind-the-scenes access to these faux domestic constructions. The works inside are modestly scaled riffs on structures endemic to human habitats. Frieze, 2015, for example, consists of a concrete rectangle with downward-bending metal slats, the artist’s drooping interpretation of structural roof supports. In another gallery, Rubble, 2015, a tumbleweed of metal and concrete plugs, hangs from the ceiling, as if the wires of an old telephone line were pulled from the ground and inadvertently knotted into a messy bundle.

The second floor features three new, large-scale commissions for the museum, exhibited here for the first time. Characteristic of the artist’s process, the creation of the works began with Sosnowska rendering crumpled vinyl and paper into small maquettes. While these models loosely dictate the feel of her larger sculptures, her structures are made from exact, to-scale replications of existing architectural components, which are deconstructed and transformed into the artist’s unique forms. The site-specific work Handrail, 2016, an abstracted rendition of the cheap plastic-covered steel banisters from the 1970s, becomes a colorful wall drawing, a curvilinear trace along two adjacent walls of the gallery. Façade, 2016, inspired by the exterior front of a mass-produced building in Warsaw, threatens to entangle the viewer in its massive, snarled web. And Stairs, 2016, cousin to The Stairs, 2011, currently installed on the grounds of the Betty and Edward Marcus Sculpture Park at Laguna Gloria, consists of an extended, centipede-like structure stretched horizontally across the floor. By reinterpreting charged architectural structures from her surroundings, Sosnowska observes and transforms elements of a complicated past into resonant commentaries on the present.