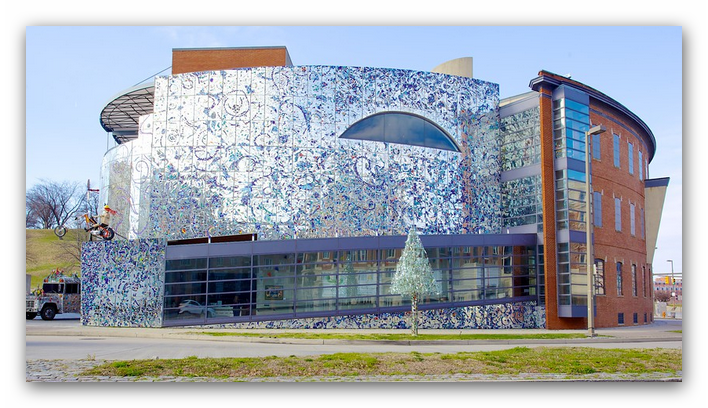 YUMMM! The History, Fantasy, and Future of Food

YUMMM! The American Visionary Art Museum raises a toast for its 21st birthday with a new visual feast in the original art exhibition Yummm! The History, Fantasy, and Future of Food. Inside Yummm! 34 visionary artists join forces with food scientists, farmers, nutritionists, environmental activists, psychologists, poets and humorists to publicly explore humankind's complex, multi-layered relationship with food. As George Bernard Shaw wryly observed, "There is no love more sincere than love of food."

Conservative projections of earth's population by 2050 now exceed 9.5 billion—thatâ€™s a whole lot of hungry mouths to feed! AVAM's Yummm! exhibition aims to inspire a greater public awareness of the revolutionary creativity needed to envision how a future planet of 9.5 billion earthlings will safely eat, cultivate, distribute, share, and even package food in radically more healthful, less wasteful, and equitable ways. With Yummm! AVAM hopes to encourage greater delight and awareness in every bite.

Yummm! also includes work directly connected to social justice issues. The exhibition will feature a tabletop installation titled “Shared Dining,” which was created by female inmates (Women of York) at a high-security Connecticut prison, and loaned courtesy of the visionary Elizabeth A. Sackler Foundation. Inspired in part by Judy Chicago's groundbreaking feminist installation, “The Dinner Party,” “Shared Dining” consists of customized place settings honoring personal heroes of the inmate artists. Amongst those honored are Pakistani activist Malala Yousafzai and Nascar driver Danica Patrick. The place settings are accompanied by poignant audio of the women talking about their choices of heroines they wish they could dine with, and those from their own lives, including a moving apology to a woman an inmate regretfully injured. A wall of graces spoken over food from cultures and households from around the world — both reverent and funny — will set a communal tone. The complex power issues embedded in food, including its history as a tool in wartime, is acknowledged with brevity by part Native American artist Craig Norton with his large painted collage entitled, “We Gave You Corn, You Gave Us Smallpox.” Joaquin J. Pomes' intricate drawings describe the great hunger caused by the Cuban embargo as well as the resourcefulness mothers use to feed their families.