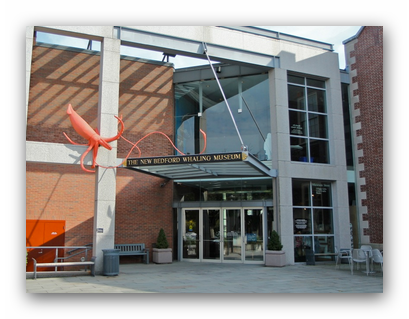 Highlighting the Whaling Museum’s extensive collection of William Bradford (1823-1892) oil paintings, watercolors and sketchbooks, Inner Light is a retrospective exhibition of this important regional artist’s life, career, connections and influences. A New Bedford native son, Bradford’s affiliations with some of the most prominent artists, collectors and thinkers of his time placed him in an influential role at the center of culture and fine art in the mid-19th century. A highlight of the exhibition is the debut of Bradford’s oil painting Schooner Ellenor, Boston, a recent gift from Herbert and Patricia Pratt. The painting is an important addition to our Bradford Collection, which is one of the world’s largest. Newly conserved objects from the collection will also be on view.

Inner Light explores Bradford’s connections and influences within 19th century America. His family owned the whaling ship Acushnet, which carried Herman Melville on his inspirational whaling voyage. Bradford studied with Albert van Beest, who shared Bradford’s studio in Fairhaven and brought the Dutch marine tradition to New Bedford. Bradford was also influenced by the work of Fitz Henry Lane, one of America’s most important Luminist painters. Work by these artists was characterized by effects of light in landscapes, poetic and often sublime atmosphere, and aerial perspective. As a teacher, he and van Beest gave instruction to a young R. Swain Gifford, and later inspired the studies of Lemuel Eldred. Bradford also had a close friendship with Albert Bierstadt and his painting New Bedford Harbor at Sunset was included in the New Bedford Art Exhibition organized by Bierstadt in 1858. Bradford painted alongside his friend in an adjoining studio space in New York City and later followed Bierstadt to Yosemite Valley. Other connections include Transcendentalist Daniel Ricketson and poet Henry David Thoreau visited Bradford’s studio and the American poet John Greenleaf Whittier who dedicated poems to the artist, lines of which are inscribed on Bradford’s grave in New Bedford. Bradford was even commissioned by the Royal family to produce the painting The Panther in Melville Bay for Queen Victoria after the Queen saw Sealers Crushed in Ice on display in London. Bradford’s “great paintings,” such as the Museum’s Sealers Crushed in Ice, belonged to a new tradition forged in the mid-19th century age of spectacle, when cycloramas, panoramas and World’s Fairs vied to entertain audiences with the wonders of man’s innovations, adventure and nature.

Like many others of his time, Bradford was an artist-explorer. He made six trips to the Arctic between 1861 and 1869, and ventured to California and the great West on the heels of Bierstadt. Other artists of this genre included Frederic Church, who traveled to South America and the Arctic, and Martin Johnson Heade, who went to Brazil. These efforts looked towards an “alternative past” that glorified nature in a pre-industrialized and an almost exclusively American experience. Their empirical realism and wordless dialogue with nature were the hallmarks of luminism. [...]

Inner Light includes Bradford works from the Museum’s collections along with works by Bierstadt, Eldred, Gifford and others who were integral parts of his story. An accompanying exhibition of important manuscripts, sketchbooks, and works on paper will also be on display in the Museum’s Grimshaw-Gudewicz Reading Room. A reproduction of Bradford’s New York studio in the Bank President’s Office, adjacent to the Wattles Family Gallery, represents his 1860s studio which was decorated like a great cabinet of northern curiosities, complete with a polar bear skin, seal skin rugs, walrus and ivory carvings, and Inuit implements for hunting and fishing.

A catalog featuring essays by Dr. Christina Connett, and Trustees Barbara Moss and Keith Kauppila accompanies the exhibition. The catalog piece includes works not previously reproduced in earlier catalogs on the artist