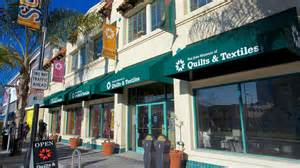 The California Art Revolution: From the Summer of Love to the New Millennium

In the last decades of the 20th century, California quilt makers charted new territory in quilt making, leading the nation in creativity and innovation. During the 1970s and 1980s, California artists were among the first to embrace the quilt medium as their primary means of expression. More traditional quilt makers also expanded horizons, creating original designs based on traditional quilt patterns. This exhibition includes works by pioneers of the art quilt movement such as Jean Ray Laury, Yvonne Porcella, Joan Schulze and Therese May, who pushed the boundaries of what could be called a quilt, and highlights late 20th and 21st century artists working in the quilt medium.