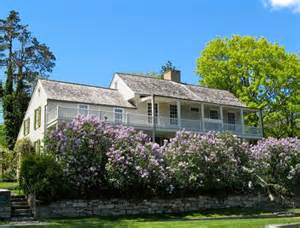 An Eye to the East: The Inspiration of Japan

In 1854 Commodore Matthew Calbraith Perry established a treaty that opened trade between the United States and Japan, a nation closed to the rest of the world until then. Perry could never have imagined the far-reaching effect that document would have. Within a year, French artist Félix Bracquemond “discovered” the woodblock prints of Hokusai and circulated them among his Paris art circle. Their influence was immediate, and visiting Cos Cob artists John Henry Twachtman, J. Alden Weir and Childe Hassam all took note. The introduction of Japanese art and culture made a splash at International Exhibitions in London (1862), Paris (1867) and Vienna (1873), and resulted in Europe’s captivation with all things Japanese.

The American Civil War delayed the introduction of Japanese art and culture in this country, but upon its introduction at the 1876 Centennial Exhibition in Philadelphia and the 1893 World's Columbian Exposition in Chicago, the “exotic” Japanese aesthetic was enthusiastically embraced.

Through paintings, prints, photographs, carvings, ceramics and textiles, An Eye to the East looks at the influence of Japanese art and culture in the late 19th and early 20th centuries with a special emphasis on the Cos Cob art colony. The contribution of Genjiro Yeto, who studied under John Henry Twachtman at the Art Students League in New York and spent part of each year from 1895 to 1901 at the Holley House, is explored in a separate gallery and features a recent donation of his work to the Greenwich Historical Society by his granddaughter.