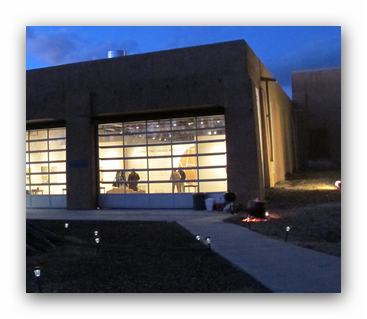 Slang Aesthetics! is the first-ever solo exhibition in New Mexico of Albuquerque-born and raised artist Robert Williams (b. 1943) and features over 60 drawings and paintings from 1995-present, and highlights from his days at Zap Comix. As well as being a painter, Williams is the founder of Juxtapoz Art & Culture Magazine, one of the highest circulating art magazines in the country. As a young man in the 1950s, he started drawing, designing, and customizing hotrods and was an active member of the Rickshaws Car Club in Albuquerque. Williams pursued a career as a fine arts painter years before joining the art studio of Ed “Big Daddy” Roth in the mid-1960s. And as his position as the famous custom car builder’s art director, he also worked in the rebellious, anti-war circles of early underground comix.

In 1979, Williams was the artist who brought the term “lowbrow” into the fine arts lexicon with his ground breaking publication, The Lowbrow Art of Robt. Williams. From this point on, he has been known as the seminal figure of West Coast Outlaw culture with his provocative image-laden, irreverent, and humorous narrative paintings about greed, vanity, and all manner of human and societal frailty and perversion.

Williams has an impressive career and his paintings and drawings have caused much controversy over the years. His work was protested when it was included in the landmark exhibition Helter Skelter: L.A. Art in the 1990s (1992) at the Museum of Contemporary Art (MOCA) in Los Angeles organized by Paul Schimmel. Most recently, Williams’ work was included in the 2010 Whitney Biennial; he had a solo-exhibition at Los Angeles Municipal Art Gallery in 2015; and Slang Aesthetics! is traveling to the Fort Wayne Museum of Art in 2017. Williams is also the subject of the documentary Robt. Williams: Mr. Bitchin’ that premiered in 2010 at the Los Angeles County Museum of Art (LACMA), in 2011 at the Museum of Modern Art (MOMA) and at CCA’s Cinematheque.

Whether you go or not, The Lowbrow Art of Robert Williams, is the fundamental collection of his work, including 16 pages of full-color illustrations and almost 30 pages from Zap. The cover is possibly the most recognizable Williams piece because it was used on a Guns N' Roses album Appetite for Destruction.