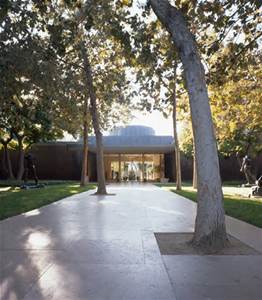 The Norton Simon Museum is delighted to present an installation of Vincent van Gogh’s tender and intimate Bedroom from 1889, a highlight of the Art Institute of Chicago’s superb 19th-century collection. A meditation on friendship, hope and crushing disappointment, Van Gogh’s Bedroom serves not only as a kind of self-portrait, but also as a symbol of the artist’s wandering existence and search for an elusive sense of repose.

The second of three versions of the interior scene, the Chicago Bedroom was painted by the artist while at the asylum of Saint-Paul-de-Mausole at Saint-Rémy-de-Provence, France, in September 1889. Its installation at the Norton Simon Museum marks the first time the painting has been on view on the West Coast, and it will hang in the Museum’s 19th-century art wing, surrounded by the Simon’s own important collection of Van Gogh works.

Whether you go or not, Van Gogh's Bedrooms, provides a fascinating look at the genesis and meaning of Van Gogh’s famed paintings of his bedroom. Vincent van Gogh’s The Bedroom, a painting of his room in Arles, is arguably the most famous depiction of a bedroom in the history of art. The artist made three versions of the work, now in the collections of the Van Gogh Museum, the Art Institute of Chicago, and the Musée d’Orsay. This book is the first in-depth study of their making and their meaning to the artist.

In Van Gogh’s Bedrooms, an international team of art historians, scientists, and conservators investigates the psychological and emotional significance of the bedroom in Van Gogh’s oeuvre, surveying dwellings as a motif that appears throughout his work. Essays address the context in which the bedroom was first conceived, the uniqueness of the subject, and the similarities and differences among the three works both on and below the painted surface. The publication reproduces more than 50 paintings, drawings, and illustrated letters by the artist, along with other objects that evoke his peripatetic life and relentless quest for “home.”