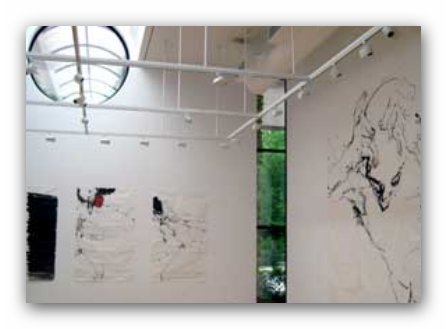 The paintings in this exhibit are inspired by fourteen trips the artist made to Cuba since 2000. For Pinsky, Cuba is extraordinarily visual: While buildings are in a state of disrepair, the elegance of what once was comes through showing a mix of architecture ranging from Moorish, Spanish, French, Art Deco, and heavy Russian. In contrast to the crumbling buildings are patches of vivid colors, music in the streets, and energy for change.

Omnipresent are busts of José Martí, the Cuban national hero who died fighting for freedom from Spain in 1895. This poet, intellectual, and essayist’s name is in front of every school and government building, as well as many homes.