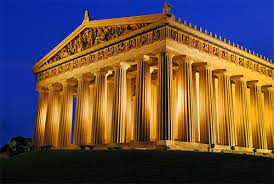 Images of Centennial Park in the Twentieth Century

The Parthenon Museum is pleased to open an exhibition of 20th century images of Centennial Park. Postcards from the Ridley Wills II Collection anchor the show with pastoral scenes from the early 1900s through a late twentieth century image of the Parthenon’s west end framed against the skyscrapers of the city. Also included in the exhibit are excerpts from WNPT’s documentary, Nashville Memories, and large-format images of people enjoying the park through the years.

When the park opened in 1904, it was one of the last trolley stops on the line that ran along West End Avenue. Today it stands as a popular respite within an expanding mid-town urban cityscape. The Parthenon remains a prominent landmark in postcards that document the many alterations to gardens, paths, and lakes made to accommodate the changing needs of a vibrant, growing city.