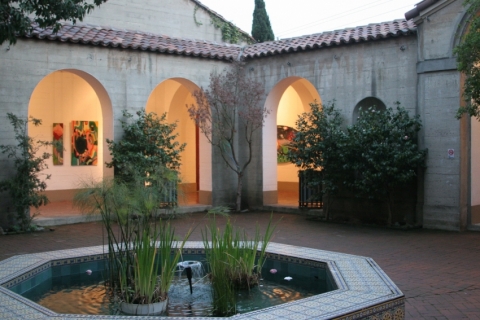 The Proposal presents a climactic moment within Jill Magid’s extended, multimedia artwork, The Barragán Archives, which examines the legacy of Mexican architect and Pritzker Prize-winner Luis Barragán (1902–1988). The multi-year project poses piercing, radical, and pragmatic questions about the forms of power, public access, and copyright that construct artistic legacy. With this work, Magid asks, “What happens to an artist’s legacy when it is owned by a corporation and subject to a country’s laws where none of his architecture exists? Who can access it? Who can’t?”

Through his will, Barragán split his archive into two parts. Along with the vast majority of his architecture, Barragán’s personal archive remains in Mexico at his home, Casa Barragán, which is now a museum and UNESCO World Heritage Site. In 1995, Barragán’s professional archive, including the rights to his name and work and all photographs taken of it, was purchased by the Chairman of the Swiss furniture company Vitra, allegedly as a gift for his fiancé, Federica Zanco; who now serves as Director of the Barragan Foundation. For the last twenty years, however, the archive has been publicly inaccessible, housed in a bunker at Vitra corporate headquarters.

The Proposal reaches a thrilling and unexpected salvo in Magid’s engagement with Barragán, Zanco, Barragán’s descendants, the Mexican Government, and the indispensable creative legacy that binds them. Through the public exhibition of The Proposal, Magid will present Zanco with the gift of a two-carat diamond engagement ring grown from the cremated remains of Barragán’s body, in exchange for the gift of his archive to Mexico.

The exhibit serves as both a poetic counterproposal to the original gift to Zanco, and a stunning re-animation of the formerly closed scenario. Magid’s gesture elegantly, and forcefully rejoins the divergent paths of Barragán’s professional and personal archives; even as it reveals Barragán’s official and private selves, and the unique interests of the institutions that have become the archives’ guardians. By developing long-term relationships with multiple individual, governmental, and corporate entities, Magid directly engages complex intersections of the psychological with the judicial, national identity and repatriation, international property rights and copyright law, authorship and ownership, the human body and the body of work. On May 31, 2016, Magid proposed to Zanco in Switzerland. The Proposal has not only exhumed Barragán’s physical remains, but opened the possibility to bring his spiritual and artistic legacy up out of the vault and back to life.