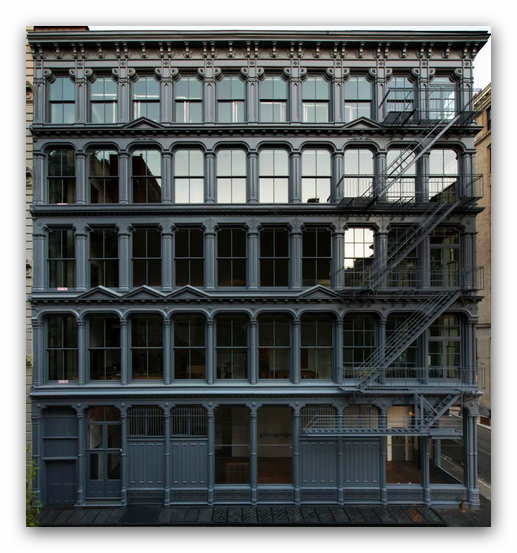 Judd Foundation is pleased to present James Rosenquist, five works curated by Flavin Judd, at 101 Spring Street in New York. The third in a series to highlight the interrelated aspects of Donald Judd’s work and thinking, the ground floor installation will feature art with Judd Furniture, select writings from the Donald Judd Archives, and selections from the Donald Judd Library in Marfa, Texas.

Judd regarded the work of Rosenquist, writing in a 1964 report on young artists, “James Rosenquist is one of the first-known of so-called pop artists. His paintings are organized in a way related to cubism, but the patterns and the lines are without cubism’s generalized and descriptive references of abstraction. Instead, the subject-matter is unmistakable, part of a car, a woman’s face or comb."

The installation will feature Time Dust–Black Hole, a thirty-five foot billboard-sized painting from 1992, along with the paintings Yellow Applause and Shadows from the 1960s, and two prints, Horse Blinders (east) and Horse Blinders (west) from 1972. Pertinent to Rosenquist’s previous experience as a commercial artist and billboard painter, Judd writes of the earlier work, “There is never any possibility of Rosenquist’s paintings being mistaken for billboards, however, as Lichtenstein’s paintings are mistaken for comics. The conspicuous fragmentation of the various subjects is immediately recognizable as art.”

Contextual to their respective practices, Judd and Rosenquist each had studio spaces in Lower Manhattan during the 1960s, with Judd on Spring Street and Rosenquist on Coenties Slip and Broome Street. They were also both a part of the Leo Castelli Gallery and had work in shows at Richard Bellamy’s Green Gallery. Rosenquist’s work demonstrates that for Judd, artwork did not have to fit within a particular, defined style or category; it just had to be “good.”