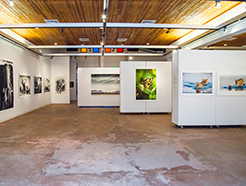 Don Weller’s heroes have always been cowboys. After studying fine arts, however, he reluctantly left them behind, and began a long career as a graphic designer and illustrator. His dynamic and often whimsical work appeared on record covers, posters, in advertisements, and on hundreds of magazine pages. Weller rediscovered his love for rural lands and the world of cowboys when he moved to Utah in the 1980s, creating the ongoing inspiration for his current paintings. Working exclusively in watercolor, he expertly captures the grit of cowboys and the striking landscapes of the west. This retrospective at the Kimball is a unique opportunity to view works from all stages of Weller’s celebrated career—from sketchbooks and early illustrations to the iconic western scenes for which he is now well-known.