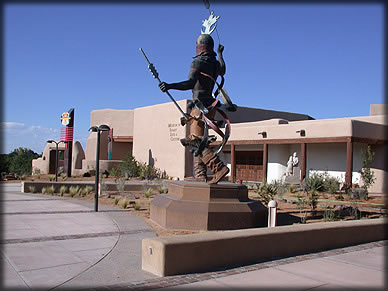 This year is the centennial of the birth of seminal Native American artist Lloyd Kiva New, and three Santa Fe arts institutions are celebrating this anniversary in style. Locally, New, a Cherokee, is known as the Institute of American Indian Art’s (IAIA) first artistic director, yet nationally, Native people refer to him as the "Godfather of Native Fashion."

The Museum of Indian Arts and Culture, the IAIA Museum of Contemporary Native Arts, and the New Mexico Museum of Art will each present an exhibition in 2016 focusing on key aspects of Lloyd Kiva New’s (b. 1916 - d. 2002) significant contributions to contemporary Native culture. Additionally, the three institutions are planning a symposium, multiple lectures, panel discussions, a fashion show, Gala, and, as pure celebration, a 100th birthday party.

Whether you go or not, in The Sound of Drums, A Memoir of Lloyd Kiva New, the celebrated Cherokee artist, fashion designer, and educator provides a memoir in a series of personal anecdotes, supplemented by photographs, essays, and manuscripts. An important figure in Native American art, design, and pedagogy, New inspired thousands of artists and students during his career. Humble beginnings in rural Oklahoma spawned an obsession with nature and a connection to his Cherokee roots--a connection he sought to strengthen throughout his life, The Sound of Drums.