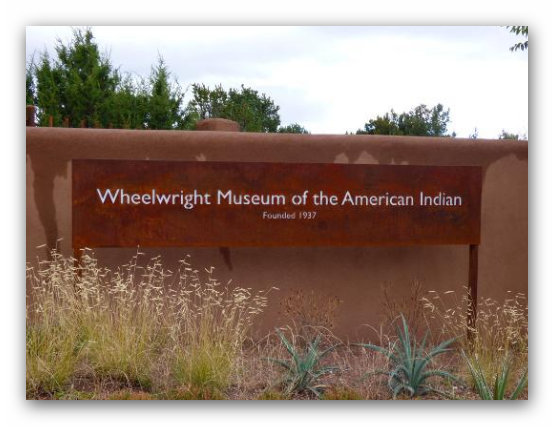 Wheelwright Museum of the American Indian

In 1968 a talented 28-year-old artist named Eveli Sabatie moved from Paris to San Francisco. Like many young people of the day, she had become deeply interested in Native American cultures, and had traveled to the United States hoping to connect and to learn. A chance encounter with Hopi traditionalist Thomas Banyacya resulted in an invitation to attend the Powamuya (Bean Dance) ceremony at Third Mesa. There, in a local laundromat, she met the legendary master jeweler Charles Loloma.

From June 12, 2016 through January 15, 2017 the Wheelwright Museum’s Center for the Study of Southwestern Jewelry will present a retrospective on the work of Eveli Sabatie, one of only two jewelers (the other is Verma Nequatewa) whom Loloma recognized as protégés.

Born in eastern Algeria, raised in Morocco, and educated in Paris, Eveli joined Charles Loloma’s studio as his focus was moving away from cast metal and toward an interest in mosaic inlay. Fueled by his passion for traditional Hopi stone and shell work, abalone-encrusted Northwest Coast masks, and ancient Egyptian jewelry, Loloma’s work underwent a dramatic change to which Eveli Sabatie made a major contribution. She introduced him to Moroccan mosaic—“the turquoise blues, the blue-greens, the lapis blues of tiles laid into the walls of mosques and fountains”— and possessed an insatiable curiosity that made her a willing pupil and an able assistant.

After leaving the Loloma studio in 1972, Eveli moved to Santa Fe and embarked on her own career, creating a jewelry legacy marked by originality, exuberance, and spirit. Favoring exotic materials including carved bone, fossil ivory, and richly colored stone, her work highlights lavish, organic shapes, crystal cabochons in open back settings, and heavily textured and stamped metal. Eveli’s jewelry is known for its opulence and wit, and for the fact that she does not repeat herself: “Every moment is of every day is different!” she says, “So how can you repeat? The moment you repeat you kill something. You’re not really in what’s happening right now. Every material is different, every hour is different, my mood is different every day.”