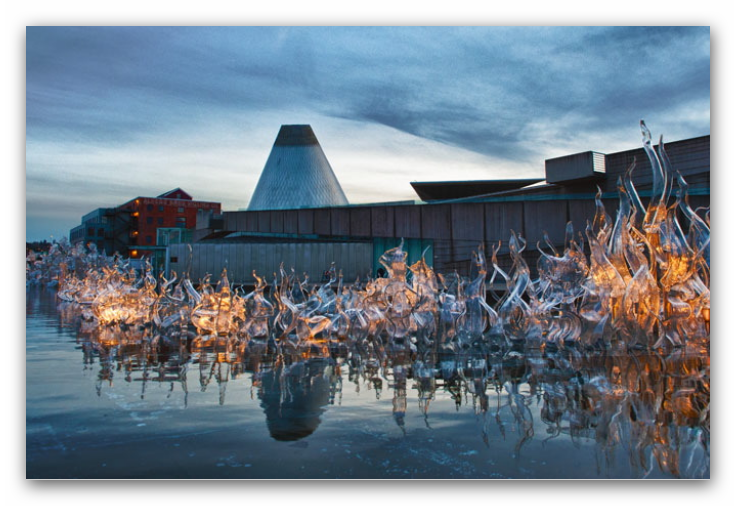 Museum of Glass visitors will have the opportunity to explore Art Deco works in glass from the collection of artist David Huchthausen. Art Deco Glass from the Huchthausen Collection will include early 20th century glass by iconic Art Deco studios such as René Lalique, Daum Frères, Pierre d’Avesn, Charles Schneider, Muller Frères, Marius-Ernest Sabino, Steuben Glass Works, and many others. [...]

Characterized by smooth lines, geometric shapes, and bright colors, the Art Deco glass movement began, in part, as a reaction against the elaborate and ornate style of Art Nouveau in the late 19th century. Economic austerity generated by World War I launched Art Deco into popularity, with artists, designers, and architects throughout the world adopting the style. Although Art Deco fell out of fashion following World War II, the style regained its popularity in the 1970s.

Huchthausen began actively collecting pieces from the Art Deco period in the early 1970s, starting with powder boxes. In 1973, Huchthausen acquired his first major work of art, a piece from the Le Verre Francais line designed by Charles Schneider, leading to the purchase of 20 more significant Art Deco works in glass over the next four years. Huchthausen’s collection continued to grow during the 1980’s and accelerated following his move to Seattle in 1989. [...]

Art Deco Glass from the Huchthausen Collection will include over 200 pieces from his personal collection, which is now composed of over 300 works of Art Deco glass, much of it by European designers. The exhibition will be accompanied by a fully illustrated catalogue with essays by esteemed German scholar Helmut Ricke and independent curator William Warmus.