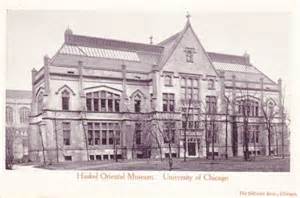 Persepolis: Images of an Empire

Oriental Institute Museum at the University of Chicago

From 1931 through 1939 Ernst Herzfeld and Erich Schmidt directed the Oriental Institute’s Persian Expedition in Iran. During their exploration, excavation, and restoration of this ancient site of the Achaemenid Persian Empire (550–330 BC), Herzfeld and Schmidt had photographers Hans-Wichart von Busse and Boris Dubensky document the architectural wonders and landscape of Persepolis. This rich collection of photographs is now housed in the Museum Archives of the Oriental Institute. The selection of photographs featured in Persepolis: Images of an Empire capture the quintessential elements of Achaemenid Persian architectural style: forests of columns, monumental audience halls, elaborate staircases, and stone relief carvings of people from all corners of the empire. This court style expresses the Achaemenid imperial ideology of harmonious order, power, and unity. The photographs on display also demonstrate the contrast between the imperial terrace with its imposing architecture and the surrounding barren landscape. This duality reinforced the magnitude and grandeur of Persepolis.

While in Iran, Schmidt conducted two seasons of aerial survey explorations (1935–1937), a project the scale of which had never been done before. From his plane, gifted to him by his wife, and named Friend of Iran, Schmidt and his assistant Dubensky took aerial photographs of excavations already in progress, of sites under consideration for archaeological work, and of areas of Iran yet to be explored. The aerial photographs allow archaeologists to see ancient architectural plans and road networks, and to understand the relationship between ancient settlements and their surrounding environment. A digital video on display in the gallery created by the Oriental Institute’s Center for Middle Eastern Landscapes (CAMEL) allows you to explore the architecture of the site and to observe some of the differences between the Persepolis of today and that of Schmidt’s era (watch the video online).